We had big plans for day 2. Get up early, swim at our beach and go to Shangri La. 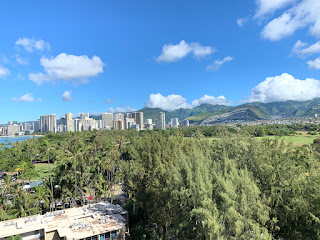 I wish I could recreate the experience of the little beach in front of Michel's restaurant via a photo tableau, but I don't want to lose my phone there, so I just have to keep it in my heart. To get there you walk through our hotel's parking lot and walk next to the service entrance of the little hotel next door. Then you're on a teeny little beach with one palm tree. It's maybe 100 feet wide, and bounded by the sea wall and the Outrigger Club. People meet there every day to swim and take out their outriggers, with the occasional small group that has hired an outrigger to do a paddle out and scatter cremains. It's perfect for us because both the beach and the water are in the shadow of the hotel above Michel's.

When I'm feeling stressed and want to settle down I think of that beach, of floating on my back and listening to the pebbles clink against each other underneath the waves. It's so restful. I feel like I leave my body when I'm there.

We had lunch at the museum, which is always a pleasure, and visited an exhibit that paired my favorite Lee Bontacou piece with Louise Nevelson's work. So satisfying. I kinda want to make a quilt in the likeness of this Lee Bontacou. 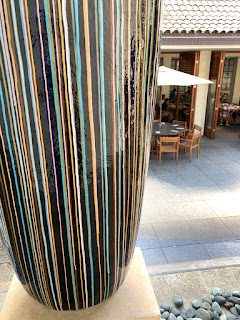 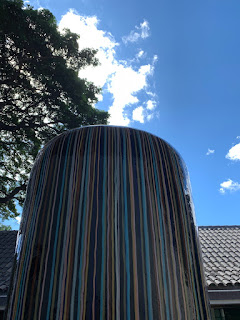 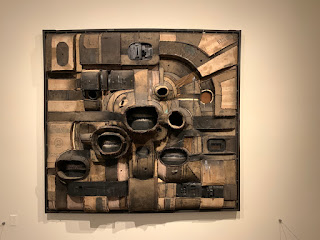 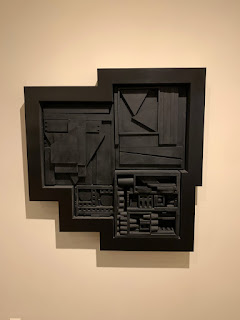 And then we went to Shangri La. It's incredibly beautiful, and during our tour I suffered from heat stroke. This is why January is the perfect month for us to be in Hawaii. 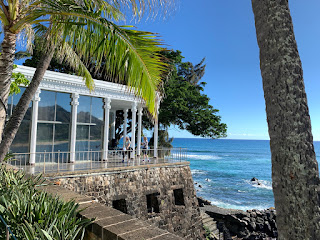 After Shangri La we went to a great beer bar and waited for our friend who works at UH Manoa to get off work. She used to work at the forklift factory. 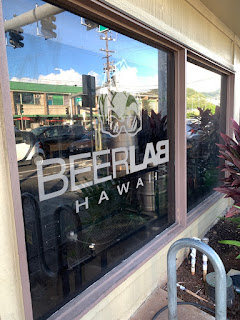 And then we went to dinner. OMG it was so much fun to reconnect. We heard all about her new adventures moving back to Hawaii. She's such a foodie. We told her how much we like the experience at Michel's (on the other side of the glass from our little beach where we swim). So we agreed to get reservations the next night and have some Cherries Jubilee :)

Last year we went on vacation to Hawaii. It might have been the most relaxing vacation ever. Like I kept saying to mrguy "I am so FUCKING relaxed". But I haven't felt the ability to write it up. Today that ends.

It had been several years since we'd gone to Hawaii, and it felt like it was time. It also happened to be my birthday, so we went.

As all vacations begin, we put the Ka'au Krater Boys on and took a drive. 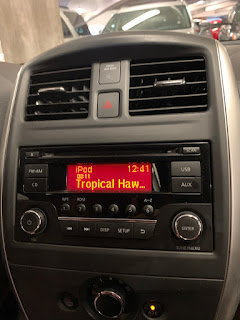 a drive from the airport to La Mariana Sailing Club for lunch. 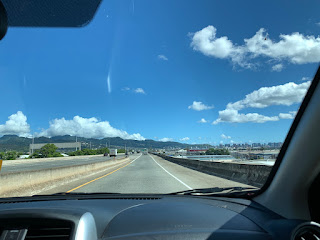 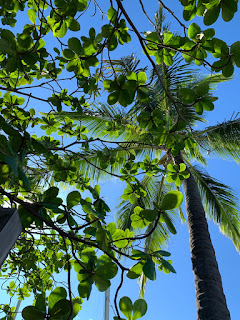 Things were a little more spruced up than usual. We asked our waiter how things were going, and she said that business is great and that they were featuring La Mariana as a set in the current Magnum P.I. reboot (season 2). They came to do a bunch of exterior shots and then for interiors built a restaurant with a fake marina with half sailboats stuck onto the floor for shots looking out from the inside of the restaurant. We will have to check this out. We heard that this all starts in season 2, episode 2.

That evening I found a film at the Hawaii International Film Festival about The Band, which is a favorite subject of mrguy (he played briefly with Garth Hudson). Cause as readers of mrsguy are aware, that's what we do in Paradise. We watch movies indoors! 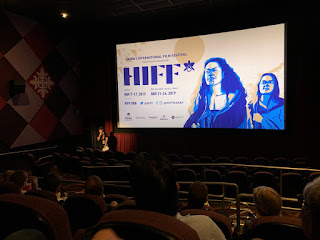 I feel like the least sheltered in place human around. In the last two weeks I have been:
I've also been to the pharmacy (because the Depends orders didn't arrive), to the market every day, to my mom's retirement community twice (picking up prescriptions), and to the mama's shelter in place location three times (to get her settled, and to bring groceries). Mrguy has been on most of these adventures also, and I worry about him.

It's funny how much effort we exert in order to keep a 92-year-old healthy and happy. And it's a little unfair that after five years of sprinting to do so we now are running uphill with this coronavirus thing. Mom will probably outlive us all.

It's important in these times to remember that beauty has a purpose and that gratitude is healing, so I made sure to stop and take photos at the doctor's office, even though I kinda hate him for making us do a urine culture on top of all the other stuff we're doing. But here you go: 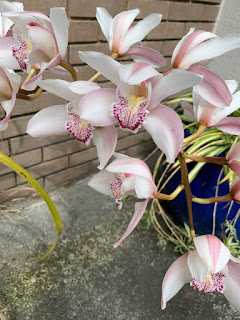 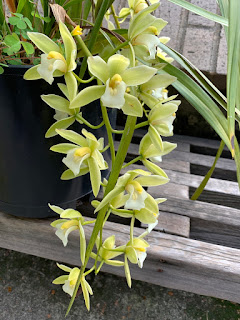 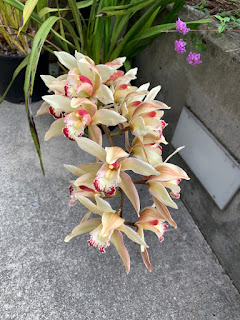 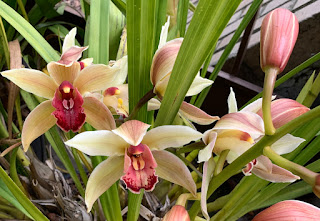 I really like how this orchid seems to be yelling at me: 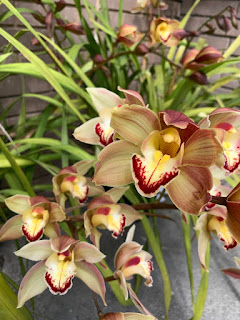 Posted by Mrs Guy at 6:43 PM No comments: Links to this post