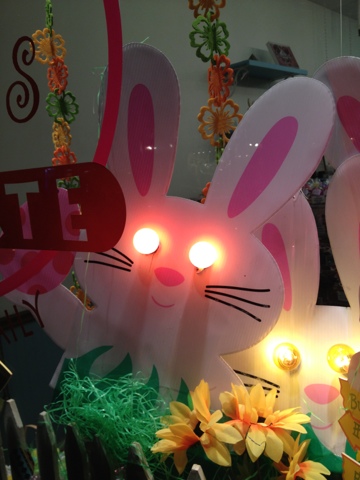 Being kidney-adjacent to shrieking children on a cross-country flight.

We are both traumatized.
Posted by Mrs Guy at 6:29 PM No comments:

Yesterday was Grandmamoo Guy Tax Day, a yearly celebration in which BigSis and I do Mom's taxes. Mom starts agitating about it around Christmas, and somewhere around the first of the year, BigSis and I plan both a birthday celebration for Mom, and set the day for Tax Day.

Yesterday morning, somewhere in the middle of my bath, I heard the doorbell ring. The Jehovahs knock, so I was a bit perplexed. mrguy got out of bed, answered the door and then went back to bed. "Who was there?" I called out over the bathwater. "It's me," said BigSis. Unexpectedly, she'd come to pick me up.

We tootled off to Mom's, did the taxes with only a few emails to our accountant and midday calls to MiddleSis. Then we went to Mom's favorite Japanese restaurant for dinner. Oh darn :)

Which brings me to the subject of hometown maki. Many years ago mrguy and I were at a Japanese restaurant in Seattle with friends. There was a Seattle Roll on the menu, which I imagine featured salmon. Then we started discussing hometown maki with key local ingredients: there's a Philadelphia Roll (cream cheese), New Orleans Roll (crawdads), California Roll (avocado). Wherever you are, the local Japanese restaurant has a roll with that name. Rochester Roll, anyone? And exactly what would be in that, anyway? Our Seattle friend, born in Rochester, replied "Creamed corn and saltpeter...to keep the incest down".

I don't know what our local ingredient would be. Crab? My hometown is on the water. Anyway, when I saw the name of my hometown on the menu I got really excited and ordered it. This restaurant's vision of my town was crispy, cool ocean and citrus: asparagus tempura, avocado, salmon, lemon. This was the best fancy roll I have ever eaten (not that the guy family eats fancy very often). Wow. 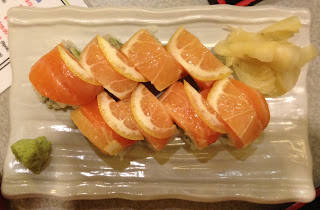 It made me wonder what other restaurants thought was an appropriate roll for my hometown. Here's what I found:

I'm going to stick with my original hometown maki.

Can't wait to have it again.

"What does 'Free Leopard' mean?" asked BigSis one day. She'd just arrived from the grandmamoo's house and saw one of the many Free Leonard signs on the freeway. "Not leopard, Sis. Leonard".

If you want to know about Leonard, this is a good place to start. This post isn't about Leonard. It's is about the Free Leonard guy, and his signs that make me so happy.

He has two kinds: one for hand-carrying, and one kind that he stashes all along the freeway in clever places. During the evening commute you see him on the overpass, standing next to his bike, wearing a backpack and shaking his Free Leonard sign. During the morning commute, it's clear that he's been busy, because overnight many of the posted signs will have been rearranged, replaced, repainted.

I love the signs. The guy's handwriting isn't great, but it's certainly distinctive -- rounded lowercase handwriting, sometimes embellished with a star, sometimes with a cross in a circle, usually with a letter or two squished together, as if he forgot about that "r", despite the fact that he's made hundreds of signs over the years. Sometimes, even now, the letters don't always fit, and this fact adds some drama to the signs. I can't quite explain it.

The placement of the signs is also pleasing. Free Leonard Guy has an uncanny ability to predict where local residents will be looking on any given day. When I'm in freeway traffic during the morning commute, and my mind wanders a bit, I always find my gaze resting on one of the signs. His sense of composition is fabulous, and I wish I could show you in photos what I mean. Alas, I'm in a moving vehicle when I see them and I've gone back with mrguy to document the signs, and they're just not the same as seen from the passenger seat. *That's* how good he is with placement.

Anyway, when I looked closely at my photos of Lava Rock Supreme this morning, I couldn't help but laugh. Without trying, I'd finally captured one of the signs.

Free Leonard guy had beat me to Lava Rock Supreme, knowing that people like me would be taking pictures of the last remnants of the restaurant. 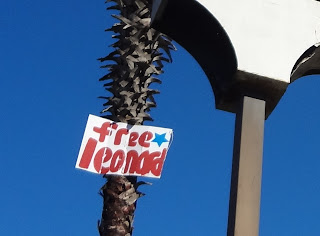 Labels: city of pride and purpose

I checked my voicemail all day yesterday. Nothing. And when I had to venture out to the store to buy tp, I swung by Lava Rock Supreme. The two decorated walls were still up.

This morning I slept in until 11. I'm still achy and weak, but I put on some clothes and went down to the demo site. The stars that I have so badly wanted since I first saw the building lay crushed in the lava debris. 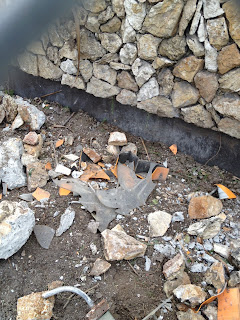 Just as I arrived, my buddy the crane operator spun around and bit the exterior wall with the claw. I watched as one of the sunbursts popped off the wall and into shards as the wall flexed. Then a large triangle of the rock wall flopped over onto our side. Neighbors stopped to take pictures. A bigger chunk, containing most of the lettering, also fell to the dust. The claw seemed to work around the lettering, but then other material fell onto it, destroying it. 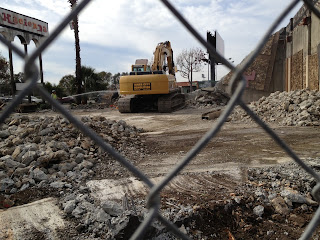 I saw some of his tank treads run over the beautiful orange of the lettering, and then had to leave. It was too sad. 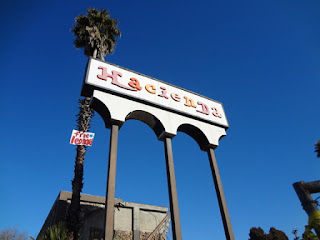 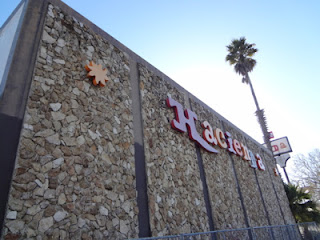 It wasn't long after Dr. Biggles' review of Lava Rock Supreme that the restaurant closed.

So began its annoying afterlife.

There comes a time in a man's life when he's retired but still wants a place to go every day. The restaurant closed, but Mr Lava Rock continued to punch in. His one car in his vast parking lot let all of the neighbors know his whereabouts. I often imagined him in the bar, sitting in a recliner, adjusting the rabbit ears to watch Fox News.

The city made him an offer for his property, as it was now blighted, his abandoned Albertsons supermarket offering a lovely tablet for graffiti. Via his nephew, the family mouthpiece, he asked for greater sums of money than the city was able to pay.

The economy crashed. The car stopped parking in the lot. Discarded sofas started appearing on the sidewalk near the dead Albertsons.

Thanks, Mr. Lava Rock and Nephew! This is your legacy. 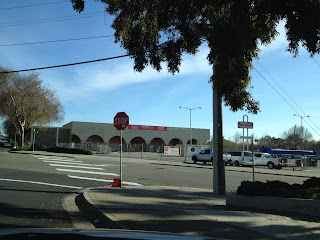 And today the claw came to bite Lava Rock Supreme down to the ground. I saw it first on Facebook. Sick though I am, I jumped into my car and sped over to talk to the man with the claw. I have always wanted the decorations that festoon the outside of the building. This was the moment to ask for it. 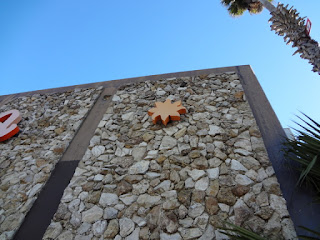 Fingers crossed. Anything that survives the wall coming down tomorrow I can have. He has my phone number, and will call to let me know. 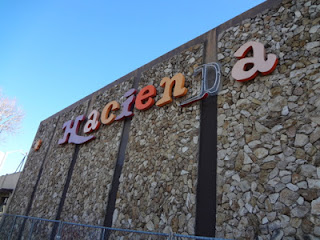 Today is your last day on Earth.

I can't believe that I never wrote about this place, but then it predated the Observatory...

We'd just bought our house, and started to explore the neighborhood. The closest restaurant to the house was this awesome-looking Mexican restaurant with excellent signage and an edifice completely covered in lava rock boulders. "Gotta go there soon, before it's gone," we said. And we did.

I believe we went on a weeknight, but it wouldn't have mattered. The vast parking lot was always virtually empty. We walked in, past some wrought iron decorations, and into a big dining room. In its day it must have been swinging. The dining room had a giant iron chandelier that looked like it could easily deliver death in an earthquake, and there was a second tier of banquettes that must have been where the fancy people once sat.

Our waitress wore her hair in a beehive, and seemed to have committed herself to going down with the ship. This would be her last job. She patiently served the couple in the booth next to us. He was hard of hearing and she was hard of seeing, and the dining experience wasn't going well. Because there wasn't music or any other ambient noise, the only thing we could hear was their arguments, and the beeping of the microwave in the kitchen.

"This is so bleak!" mrguy said to me. Indeed. Our dinner came out piping hot, and when the waitress warned us not to touch the plates, I looked over to see that the filthy potholders she was using were encrusted with very old refried bean crust. Wowza. We didn't go back.

For a really good time, please read Dr. Biggles' review of his dinner in the bar area.