Today a friend asked a question: are Trader Joe's shoppers more awkward and spatially challenged than shoppers at other stores? Is it just her store? The consensus from her friends is that people are nerds all over.

Honey, we have bourgeois problems and I don't know how I feel about that.

I find Trader Joe's to be cult-y and crowded. It reminds me of some of the entitled rich hippies I served at my last waitressing job. Just thinking about it and them makes me feel anxious. I am far happier shopping at a regular grocery store. It's true that I get my weekly fill of organic veggies. In that way I'm not exactly keeping it real, but in my mind the value of getting the box is in the variety it brings to our diets, not necessarily the cult factor of organics.

Clearly I'll be gnawing on this subject some more.
Posted by Mrs Guy at 1:02 PM No comments:

Our VHV crossed paths with awards season yesterday. We had a Hawaiian-themed menu and outfits. Two of the ladies of Three Letters and one willing husband came over to watch. One of the ladies came in full-on Hawaiian wear, bearing bacon-wrapped pineapple. Yum.

We watched the red carpet (amazing how they broadcast all of the forklift industry awards!) and squealed appreciatively when our forklifts were recognized for their sturdiness and safety record.

After the awards after parties we drank mai tais, ate ice cream (I made chocolate ice cream with candied yuzu peel) and watched the sumo basho. Going into that day's matches there were nine guys in first, so it was pretty exciting. I think one of my ladies really liked the sumo :)

Today we bought a new bed frame, went to look at mattresses that don't need to be stuffed with money because they're *that* expensive and ate at a groovy Pakistani restaurant.

Sounds pretty un-Hawaiian, but we did just finish playing uke together, mrguy and I.
Posted by Mrs Guy at 7:32 PM No comments:

During the holidays I started thinking about how sad it would be that we weren't going to Hawaii in January, as is our custom. So I devised the Virtual Hawaiian Vacation (tm) for us to enjoy. Except for the part about how we're still working and it's cold and grey, it is *just* like real Hawaii.

On day one, I wore my new vintage Ui Makai sundress and rubber slippers from the ABC Store. I was on deadline, but when it wasn't too distracting I listened to Hawaiian 78's at work.

I didn't have much planned ahead for last night, but mrguy suggested we go to Trader Vic's for dinner, which was an excellent idea. The food was really excellent. I had something traditional, the Bongo Bongo soup, and then the scallops, which were on a tamarind-based barbeque sauce and served with a corn cake and pickled vegetable salad. Surprisingly tasty, and a fine beginning to our Virtual Hawaiian Vacation.
Posted by Mrs Guy at 4:09 PM No comments:

I don't know which will cure me faster: the pozole or the amoxycillin.

The water heater man woke us up plenty early, and after we took our first baths sinc Monday, we headed out to the store for a big shop, followed by an afternoon of rest. Mrguy slept all afternoon. I watched two episodes of Hawaii Five-0 and made us life-giving soup.

I think the best thing today, however, was picking up my prescription. Lane one of the drive-thru was busy, so I had mrguy guide us to the other. He didn't know we were in for a surprise: a pneumatic tube system. You use the intercom to tell them that you're picking up your order, they put it into a big plastic tube and gets sucked into the chute next to your car.

The last time I saw one in use was in the x-ray department of the Kaiser I used to go to. It is no more. But old technology lives on in the Walgreenia of a nearby municipality. 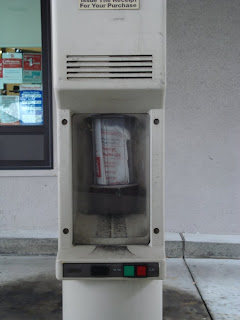 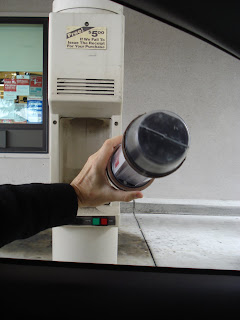 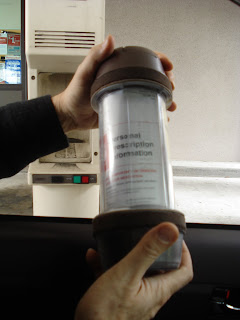 Things like that make me want to live here forever.
Posted by Mrs Guy at 7:00 PM No comments:

Polly Put The Kettle On

I don't think we've had hot water here in guyburbia since Tuesday or Wednesday. We should be back in business tomorrow, but in the meantime the electric kettle and I Should Coco are my salvation. That *and* mrguy, who is taking the train to a town that's 20 minutes in the opposite direction of home after work tonight, just because they have a Lowe's there that has the coupler that we need to fix the hot water heater. Fixer man will be here at 7:30 in the AM.

In health news, my head cleared but was replaced by laryngitis and a raging sore throat. I went to the doctor and was, surprisingly, seen by a woman who had been my parents' primary doctor back home for over 20 years.

Tonight we soil someone else's dishes. Time to eat out.
Posted by Mrs Guy at 5:53 PM No comments:

I have a cold and the hot water heater is busted. I was working from home today in bed, with cats, Kleenex, a computer and the phone there with me...and nobody in earshot to hear my old man noises. I have felt better.

I just emerged from my bed / workspace to get some tea and chocolate from the kitchen. Throat Coat is hitting the spot, and so is the Dove. I don't care for chocolate much, but I have a soft spot for the Dove.

One of my favorite memories of a spring spent in New Hampshire is of sitting on the porch glider on my day off with a Dove ice cream bar and reading the National Enquirer. It was a banner year for tabloids. The presidential race was heating up. The Democratic front runner, Gary Hart, was about to come not only to the town where I lived but to the hotel where I worked. Dozens of reporters descended on New Hampshire in advance of his arrival. The day they showed up, the Miami Herald broke the story of Hart's infidelity. A week later, he chose our hotel as the spot where he announced he would give up the campaign.

All that summer I had tabloid tales of Donna Rice, Fawn Hall and Jessica Hahn (as well as Iran Contra, which people should have cared more about) to keep me occupied in my spare time. That and the guy upstairs. I never met him, but he would blast CSNY's Dark Star every single night when he got home.

When I am eating a Dove chocolate, that's what I'm thinking about.

You're free to think of something else ;)
Posted by Mrs Guy at 5:31 PM No comments:

Our youngest grand-niece got the can of rattlesnake and was *not pleased*. MiddleGuySis performed a good deed and stole it from her. The little one liked the bag of old makeup she got in the second round. Whew.

It is only because I love my brother-in-law so much that I did not steal the Billy Beer from him. He would've been sad, and White Elephant is all about keeping the laughs coming.

I heard the whir of her car engine from inside the garage, where I was riding the exercise bike. The grand mamoo had arrived! New Year's Eve was upon us :)

We ate cheese and drank a little bubbly with middleguysis before heading out for a Hawaiian New Year's. Mrguy stayed in his tiny bed, sick as a dog :(

After dinner the family band played some tunes. Auntie Sassy's Boys played, and then Red and I winged it. No way was I going to go straight in after the Boys, though, so we tossed them some irresistible cuteness first, in the form of Red's three-year-old singing "Last Christmas I Gave You My Heart". Audience was rendered helpless, then we winged it and earned our mai tais.

This morning I woke up early and watched the Tournament of Roses Parade with mom and middleguysis. Totally excellent. People from other lands must think this parade is really wacky, because it is. Think about it: crafty people paste a jillion pounds of organic material onto a souped-up car frame and drive it through Pasadena. I think the parade's wonderful and I try to watch it every year.

UPDATE: For cool pictures of the preparations for this years' parade, visit the LA Times coverage here.

Then the Precious Family came over to visit with mom and sis and us, and then that nice boy came over.

He and I and mrguy caught up on the many many years its been since we saw each other last.