On this holiday weekend, I stopped by the store for some eggs. I've been craving them during the Whole Life Challenge, and wanted to make some deviled eggs for mrguy and for the mama, who was coming over for lunch today. 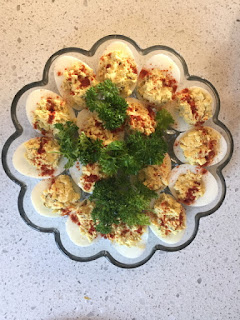 Man those eggs were good. Here I am happily sampling while doing Norwegian genealogy research. The big blue book is my trusty Norwegian dictionary, cause sometimes you know that Google Translate's words "Male's brother Unmarried Inner Snouts" probably actually meant something in the original Norwegian. In similar news, there is a newspaper whose name Google Chrome translates as "Eyelids". Best newspaper name ever. 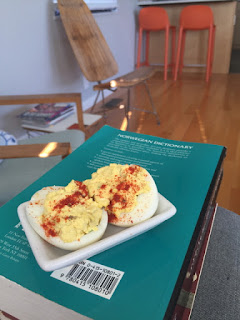 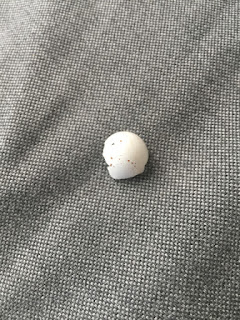 In other egg news, we have a birth to announce. A few months ago we bought a security camera for the front door, mostly so I could see which breed of animal is eating my plants. Soon a nest appeared on top of it, and now we have a family of Black Phoebes hanging out at the front. When we open the door, they fly to the No Parking sign in the middle of the street, and then return to the nest when the coast is clear. Today when she was leaving the eagle-eyed mama saw a little shell on the ground. Sure enough, a little later we heard the sweetest tiniest peeping sounds coming from the nest.

Our new birds have arrived!

Update: one week later there are three little fuzzy heads in the nest with their beaks wide open. We had the front yard and back slope groomed today, so there will be lots of bugs for mister and mrs phoebe to collect for the young ones. And our camera does audio, so we like to listen to them when we can. It's sweet beyond words.

The search for documents continues vis a vis Irish citizenship, and my interest level surges and then diminishes because finding documents and then obtaining them even when you have all of the information about how to get them is darned challenging.

The folks in Ireland couldn't find my grandfather's birth record, but I knew what it looked like in scanned versions on the Internet. So I called Ireland early one morning and guided them to the page and then the part of the page on which the record was to be found. Sure enough, the certified version arrived a few weeks later.

American records are proving much more difficult. Pop was born in the state of NY, and those guys are TOUGH with their records. Getting his birth record was going to be impossible, but I have his certified copy from the City of NY that he used to get a passport in 1970-something, and that's what I'm going to use.

My grandfather's death certificate was the toughie. A few years ago I looked, but didn't know the location of death. I remembered from conversations with my aunt many years ago that the "country place" as they called it, was situated at the crossroads of several municipalities. They paid partial taxes to each. I have spoken to or corresponded with each of the registrars. Some were allowed to answer questions, and some were not. Each had elaborate conditions I would need to fulfill in order to even ask for the death record.

Eventually I remembered that I had some contracts related to the sale or rental of the house. I looked in them and the house did not have an address. It was at this point that I was feeling overwhelmed and decided to hire someone with more experience than I to help me through the hard parts. At about that time I discovered two things: a) I might need a court order to obtain a death certificate and b) I found the NY death index and learned the death cert # and locality of death. Whew.

The intricacies of this whole project are pretty daunting. My grandparents were unmarried (to each other!), which for Irish records folks is unusual. And my grandfather often misstated his mother's first name (half of the children called her by one name in records and half of the children used another). And he lied about his age. So there will be extra documentation and affidavits to produce. None of this is cheap, either. But I want to prove that I can do it.

We drove out to the desert for realsies this day. Mrguy's family had lived in Oro Grande and Hodge (when it was called Helendale or Cottonwood Station), and that's where we went. I'd never been to Route 66 before: 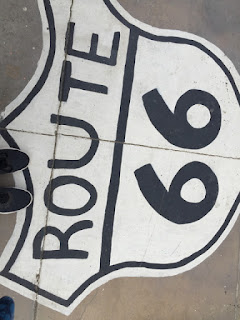 I bought some awesome lavender scented goat's milk soap in a store downtown. And while talking to the proprietor of the place where we bought it, she told us some local lore that helped us identify where some points of genealogical interest were located. And she told us where to find the town's unofficial mayor.

Am I right in thinking that he came over from his place to downtown to meet us by means of golf cart? I think so.

We had a great time talking to him. He told us where Hotel Whitman had been (another relative of mrguy's was the proprietor). And he talked about the changes he'd seen over time, living in Oro Grande. The cement plant where the hotel proprietor also worked is still there. We stopped at the local pizza parlor where they display old timey photos of the town, and ordered some pie. Turns out that they make apple pie on pie dough. And it was a crazy pants idea but not half bad! 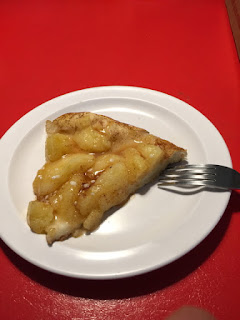 Then off to Hodge before the sun set. Past some houses that should be condemned but are surely occupied. There's a lot of this out there. 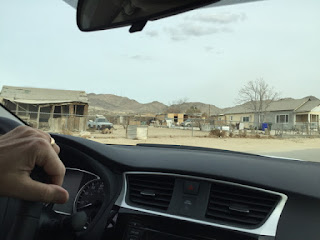 And finally to Hodge. Right near here is the property where mrguy's great grandfather lived. 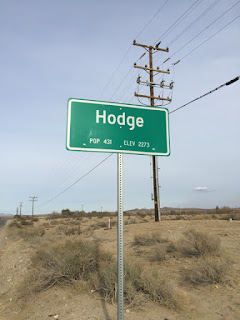 Here it is in all its glory. I'm really happy we could stand on that ground and see where they lived. I just can't imagine how they were able to live out there, in those times. 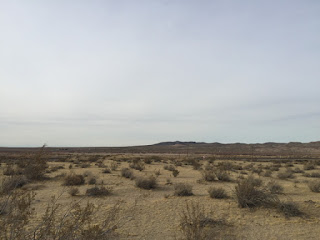 The next day we drove up to Pasadena to see mrguy south. We stayed at a fancy hotel in a place very unlike this photograph and then visited the Sam Maloof house. So ends our trip to San Bernardino.
Posted by Mrs Guy at 3:02 PM No comments:

We took a lot of photos while we were in San Bernardino. 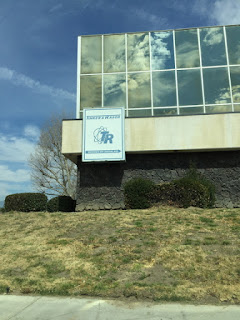 We fell in love with Queens: 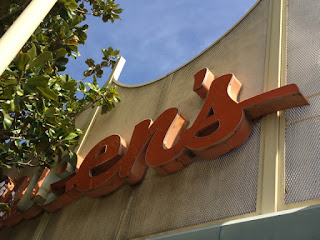 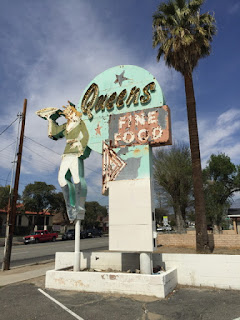 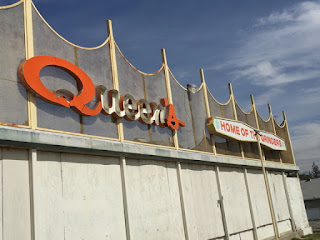 And from the archivists we learned that this strip club is also a dispensary, and that's why it's green. Almost all of our travels took us past Flesh Showgirls, sometimes three times a day: 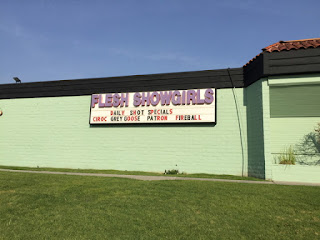 And mrguy really wanted a picture of Star Crab. It's a winner on so many levels: 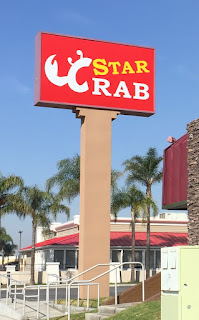 So ends the signage tour of San Bernardino. Next, we go to the scene of the crime.
Posted by Mrs Guy at 3:01 PM No comments:

San Bernardino was surprising to me. I had no preconceived notions, initially, until the review for the kitschy hotel where I wanted to stay said that homeless folks wander around the grounds and panhandle. That seemed less than inviting. We stayed at a hotel near the mall, instead.

San Bernardino is a dusty, downtrodden, and we saw a lot of people who looked like their lives were very hard. But we had great interactions with everybody we met. Surprisingly, we also found good food. Corporate or no, BJ's Restaurant and Brewpub was good enough for two meals: 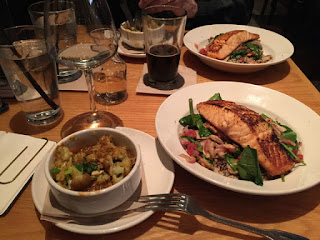 And a place with very expensive poke (it's the desert, you know) was also a fave: 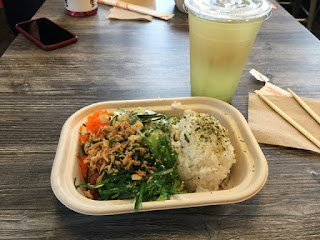 I just wanted to make sure that we had some protein to fuel the research. First stop was the county archives. The archivists were efficient and of good cheer. They showed us the original of the 1888 coroner's inquest. Most people interviewed said that mrguy's great grandfather deserved it. Wow.

After the archives we visited the local history collection at the library. It's staffed by dedicated volunteers. The kind of people who retire on Friday and return, unpaid, to the same desk on Monday. One of the volunteers, who works in the clipping collection, is 94. It was a convivial room full of helpers, so while mrguy shared stories, I buzzed around taking photos of biographical materials. We learned a lot. Great folks.
Posted by Mrs Guy at 3:00 PM No comments:

After our big Germany trip last year we had thought that this would be a year to go to Ireland. But after some thought we decided that another big trip was too much, too soon. I  got really excited about the idea of going to San Bernardino instead. Just as good.

I can't recall when, but within the last year mrguy had a complete genealogy conversion. Since then, he and I have been digging into primary and secondary sources to try to figure out why and when his people had come to California, and what really happened with the mysterious great great grandfather who was killed by an unknown assailant.

Once mrguy was on the case, that ancestor could hide no longer. A cousin had found a newspaper clipping describing the circumstances of the killing, and it gave us an AKA for the ancestor that was also helpful. And right before we went to San Bernardino, we used plat maps of the ancestor's land along with Google Earth to find the location where the guy lived (and died).

In March we flew to San Bernardino and rented a car. As always, the trip started with Ka'au Crater Boys' "Tropical Hawaiian Day". 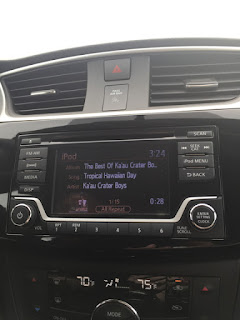 and then we made a beeline to Pioneer Cemetery. We knew from an uncle's previous research that mrguy's people were buried at Pioneer, but we struggled for days with locating them. Turns out that many homeless people live in the cemetery, but that if you say "Good morning" and "Excuse me" they don't mind your poking around looking for your people. 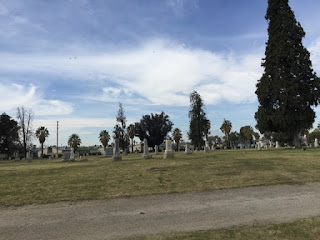 We eventually did find our people on Day 3, after going to the Park and Rec department. Note: if you are looking for burials in Pioneer Cemetery, you can go to Parks and Rec with your names, and they will look up their burial location and give you a map. You're welcome. We also spent time at Mt. View Cemetery, and found one of our rellies there as well.