After the estate sale I wanted to go to the fish market. Such a relaxing place!

On the way there, we stopped at the brew store, and mrguy mentioned that mrguy south had recently seen a kit for making umeshu, one of my favorite potions (1). Ume is a fruit that is referred to as a Japanese plum. It is actually a smaller green cousin of the apricot. Umeshu is a plum beverage made from that fruit. What would it take for us make our own umeshu?

Not five minutes later, we were in the fish market, with a box of ume and a recipe staring right at us, taunting us to buy. So we did. Here's how you make it:

Wash the ume and pick off the blossom ends. Fill a sterilized canning jar half-full with fruit. Weigh the fruit. 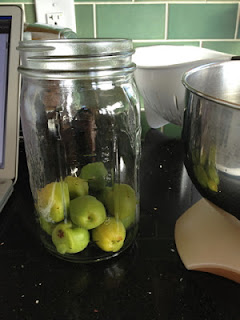 Add half its weight in rock sugar. 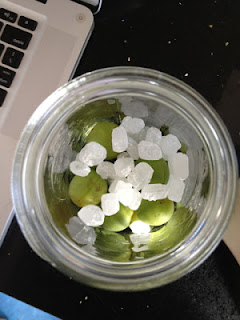 Pour in shoju to cover. 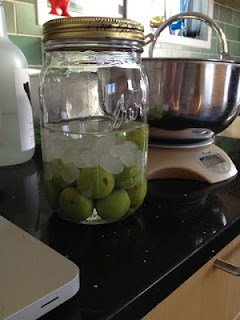 We experimented with two different types of shoju: imo, which has a stronger taste, and a different kind that is milder. Just for fun, we did one smaller batch with some smelly Baijiu (Chinese moonshine) that I bought at Ranch 98. 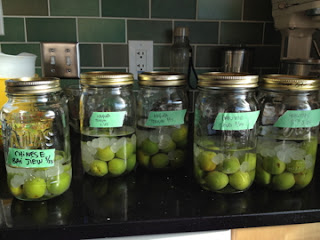 All we have to do is wait 3 months and hope the jars don't explode in the hall closet.

(1) As an aside, I learned a while back that plum wine was the preferred beverage of one Donald DeFreeze, aka Cinque, leader of the Symbionese Liberation Army. The Patty Hearst kidnapping and all of that mayhem? Fueled by plum wine. Not that that's any recommendation!
Posted by Mrs Guy at 7:09 PM No comments:

I could not be happier. It's a beautiful day -- the first day of Memorial Day weekend. I thought we'd start on a high note and go to an estate sale. Turns out it was on the same block as Malibu red's house. Who knew?

It was a trip. Obviously the home of an original hippie. And completely filthy, like a chicken coop. There was old rusted weird stuff everywhere, dust, cobwebs...grains and coffee beans were strewn around the bedrooms and it somehow did not smell like old dead people.

I felt sorry for the young hipsters running the sale, so I was desperate to find something to buy. I almost bought a Congressional Yearbook from 1970 whose cover decried how humans had finally become masters of the Earth just in time to kill it. Inside were reports about all of the regulatory agencies put in place to safeguard the planet. Remember those? Don't get me started.

So I put it down and looked for something else. In the side yard I found this perfume bottle. Tried to pay for it but he gave it to me: 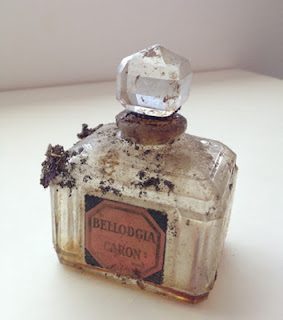 It's very pretty and the perfume, I discovered, smells delicious. On further examination I learned that the stopper and bottom are signed. It's Baccarat crystal. I am hoping for a small windfall when I sell it. 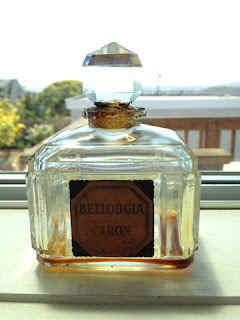 Nice start to the weekend.

I have a sore throat, got my period five minutes ago and when I was out of the room a cat herked up a hairball on my sheet music.

I am up in the middle of the night eating "Oriental" flavored potato chips and big old gummy pig faces.

Must be in Germany.

I kinda like Hamburg. Mainly because it has lots of groovy stuff in windows and shops that are open when I am free. In that respect it is the anti-Bonn.

My evening jet lag is not so bad, but it had me visiting Facebook where I found a friend request from a guy who used to work at the forklift factory. He is one of only two people I have de-friended in years of being on fb. Here's how it happened:

Most of my fb friends work at the factory. Most are not people I spend time with in person, but I enjoy their thoughts on fb and have become better friends with them at work because I know more about what interests them. A small proportion of those are people I don't know at all, like the guy who has a bajillion friends, 79 of them mutual to me. I think he wanted to be friends with all the girls in my band.

Anyway, that guy, let's call him work guy, sent me a request. I didn't know him but we had 79 mutual friends, so I said yes. After this we became more like wave-in-the-hallway people. One day, while I was still in the Hawaiian band, we were rehearsing during open restaurant hours. I saw work guy and his girlfriend on the sidewalk looking in. I waved to them through the window, hoping they might decide to stay for dinner (the restaurant was failing). They came in and watched us play. We were in the middle of a song when he yelled out, playfully, "Isn't one band enough for you?" He knows I'm in the girl band.

Unbeknownst to me, our bandleader began to seethe over the fact that I was in two bands. Readers of mrsguy will recall that the seething manifested itself in new band rules being drafted, and my leaving / being kicked out of the band by proxy. Our subset of former bandmates formed Hawaiian band of our own, and we're still at it 3 years later :)

Not long after the inciting incident, which was very painful and annoying, work guy ended his employment with the forklift company. A year later I unfriended him. I hadn't had any contact with him since he left the company, and every time I thought of him I also thought about the unintended consequences (good and bad) of his comment that day. In addition, I thought of the unintended consequences of my choosing to wave him into the restaurant instead of focusing on the bandleaders. So I cut the fb cord.

Today he noticed. After 2 years. This the convergence of social media and social awkwardness. He's now in friend limbo until he notices that, too.

Seeing this recent article making the rounds reminds me of the only piece of useful advice I've ever gleaned at a wedding reception. An old college friend whose grad school roomate was from Burundi said that his Burundian roommate claimed if you are ever being pursued in the water by a hippo, swim in right angles to the hippo -- they're very fast under water when heading straight, but the length of their body makes turning difficult.

He also told me how to evade big cats, but I can't recall the technique.

Tis the season! The first week of May marks Norway Day, a cultural event that bigsis and I really enjoy. This year was especially fine.

We missed the opening ceremonies, in which a Norwegian choir dressed just like our dad (grey hair, grey slacks, navy jacket and a sweater vest) sings the national anthem. It's like Mr. Smith from The Matrix -- Norwegian Dad clones.

The first musical act was Ann Marit, whose music was lovely and un-embellished. Her voice reminds me a bit of Louise Hoffsten's on her record, Kära Du. I will definitely be checking her out. 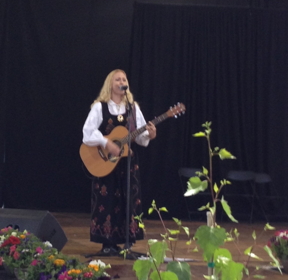 The food demonstration made us want to make lefse. Bigsis wondered if our grandmother had made lefse at home. I reminded her that she was supposed to have been a terrible cook. But maybe that was just her biscuits. I saw a lefse grill in Skymall this month - maybe I'll buy one.

We bought our raffle tickets, had some lefse-wrapped hot dogs with crispy onions and mustard, and visited the Heidrun Meadery booth ("from flower to flute," says their motto). For dessert, a little orange-flavored cod liver oil at the Nordic Naturals booth, and some amazing local marzipan. 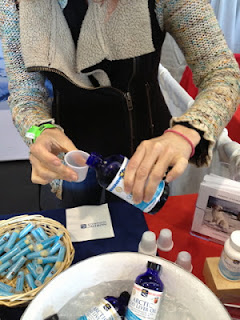 And finally, what Norway Day would be complete without a snap of something that says "Uff Da!"? Thankfully, in this part of the country Norway Day is a slightly less cheesy, but a little bit is kinda fun: 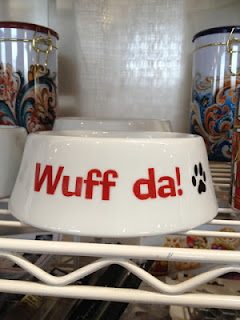 Crossing my fingers for those raffle tickets...

I should have put this on my bucket list: I've always wanted to play music at a retirement home.

Soon I will get my wish. Our Hawaiian band is rehearsing for a ho'ike in June, and someone had the brilliant idea of rehearsing at a retirement home.

I'll get my retirement home gig, and the residents will get to see the dancers do their thing. Their payment? Repeat performances and having to witness Kumu No'filter dress us down "Use your PO'O!!" "I can see your underwear!!" "Did I tell you to start playing?"

She's not as intimidating as James Brown, but I have to admit that the first couple of times she corrected me I didn't recognize that her comments were directed at me because it's been a verrrry long time since anyone has spoken to me in that tone of voice. Ouch, Lady.

Anyhoo, we're going to play at the ho'ike, which will be fun, and we love the ladies of the halau, and Kumu No'filter has good taste in music, so we're learning some new Tahitian songs.