The One That Got Away

Oh Lepus Cornutus. I almost had you in my grasp, so to speak, but I wasn't around to bid on you. What the heck am I talking about? The lovely jackalope with the sweet downy ruff that was up for auction in a neighboring burg. I know I'm not supposed to, but I really like taxidermy, and I wanted that jackalope.

When I was just a little Guy, we used to stay with friends at their cabin in a town called Hobart Mills. They lived in the city, but spent as much time as they could at the cabin, where they fished and hunted and gathered. On one trip they took us up the mountain to spend the day picking elderberries, choke cherries and spiny red gooseberries. We made some amazing jam.

The most remarkable feature of the cabin was the decor, which could be characterized as "Early Dead Animal" -- flattened wolves with snarling faces, sheep (only the heads), and curling jumping fish. I found this place and our hosts completely fascinating. It was at a lake near their cabin that I caught my first fish -- a four inch brown trout. I was so disappointed that nobody would let me trophy mount it. Oh well.

My godmother's den was studded with gaily painted marlins and swordfish. I loved them too. And when I visited my great aunt's house and found a dusty old mahi and sailfish in the attic, I asked her if some day I could inherit them. She thought that was really funny, and sent me off on the train to Manhattan with the mahi. Years later, Beulah the sailfish joined us. So when I saw the jackalope this week, I thought I'd give Beulah a little mammal sister. 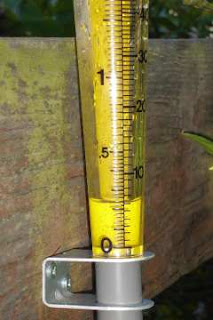 It's not really cat watering time, but we had a back fence neighbor who used to say that. He was a cheerful bohemian type, who loved people, cats and alcohol, not necessarily in that order. In the afternoon he'd prop his mug of beer on the garbage can, turn on the hose, and water his garden. His trusty cat Sparky (litter mate of Nose) would try to help. When Sparky would get in the way, John would warn "It's about cat watering time!" and because we were on the other side of the fence, I'm not sure what happened next. He loved that cat.
Posted by Mrs Guy at 7:43 AM No comments:

A Sunday at Home

It's gonna rain, and I'm totally excited. Gotta get the rain gauge installed before it does so I can keep track of the action.

The cool kids laughed at my excitement about the rain gauge and other scores from the weird store in L.A. But I fly the geek flag freely, so they shouldn't be surprised. I finally listened to "Funny Tape" in the car and recognized it as a record called "Sebastian Cabot, Actor / Bob Dylan, Poet". Gave it to one of my uke buddies from work and she loooves it.

My goal today is to get out and dig in the garden, make ahi poke and cook up some asparagus from the organic box. Mr Guy has his eye on dispatching a kabocha squash.

But first, a glass of buttermilk, some eggs, and one of mom's amazing oranges.

We're getting a late start.
Posted by Mrs Guy at 11:39 AM No comments:

I came away with what I usually get at estate sales: small practical items that make me happy for almost no money, and a small vase that fits on the kitchen window sill. I go home, clean up the vase, and fill it with flowers. Easy peasy.

But we happen to be in the market for some furniture right now, and I was hoping to come home with something obscenely large, in teak. There wasn't anything really good at these sales, despite the description in the paper. It was like answering a personals ad and trying to fall in love.

I did that. After developing silly crushes and writing mash notes to sound men in nightclubs and being teased about it by one of the handsomest guys in show business (to whom I was chopped liver), I answered a personals ad.

I met the ad-placer at a hipster coffee house. We had an o.k chat, but he wasn't what I thought. Such a nice earnest guy, but not a happy one. He showed me his place and he had great instruments (including a Gretsch White Falcon), so we jammed for a while. He called later but I lost his number and met mr guy (an unadvertised find). A few months later on a 1:45 am beer and cigarettes run with mr guy, I saw the man from the ad. He was buying a fizzy water and a bottle of Sominex.

Like me, he probably met his person after that. Probably not through the ad.
Posted by Mrs Guy at 8:38 PM No comments: 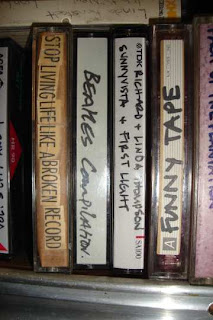 Last weekend I crossed the street. Went to LA to see a dear friend I didn't know well, if that makes any sense. And this is where street crossing begins.

Our work in the forklift industry brought Miss Burbank and I together. Mr Guy encouraged this further after meeting her and seeing how much we like each other. He made the radical suggestion that I plan a weekend with Miss Burbank, like he does sometimes with Mr Guy South, and I up and did it.

She took me to the weirdest place, the Oak Crest Market in Studio City. Part wine store, part thrift store, they have a deli and sell produce. You can buy potatoes and Jello salad, NOS (new old stuff) and OOS (old old stuff). Every item in the store is covered in a layer of dust that is either thin or thick, depending on the item's tenure. I left with a pack of cigarettes, a rain gauge and some mix tapes, one of which, "Funny Tape" turned out to be a tape of a record called "Sebastian Cabot, actor / Bob Dylan, poet." I didn't think it was funny, but gave it to someone at work who did!

We went to Fred Segal, which is the kind of store I'd usually be too intimidated to go into. But with Miss B, I was not, and my excuse was that I was shopping for an upcoming fancy "do" at the factory. Emboldened, we went to a resale clothing boutique, and then we crossed the street to walk back to the car.

Across the street we found an antique store that also had clothing in the back and I tried on weird designer garments, causing Miss B to say "we should cross the street more often." There you have it. Our whole wonderful weekend was crossing the street, and everything we did had that magical quality of trying to do something that was new, either because one of us hadn't done it or because we had never done it together.

More photos to come, and a trip up here for her in the future.
Posted by Mrs Guy at 7:23 AM No comments: 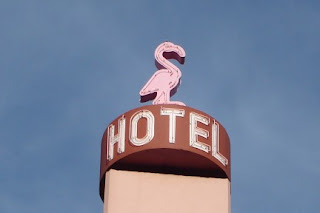 This weekend we went to the birthday celebration of Mr Randommeats. His parties involve a) homebrew, b) his 20 best friends from college and earlier, and c) some of the Guy Family. In this case it was me and mr guy, and Random's wonderful mom and brother.

We got into town early and tooled around. In the distance a beautiful pink hotel caught our eye. We stopped to take pictures and wanted to see the lobby, and before you knew it we gave our $99 to The Flamingo Motel, an architectural wonder of the kind that is mostly extinct nowadays.

So on the way to the birthday party, I saw a used clothing store with a $5 rack on the street, and bought some pull-on pants and a t-shirt ("Everybody loves an Italian boy") and I was jammie-fied and ready to have some fun. Which we did.

As soon as we got back to the house (Guy Family Brewing), one of the revelers started setting up his cot, so "when it's blackout-30 all I have to do is crawl over and get in."

We're old, so we turned in after the corned beef and cabbage and before the keg stands.
Posted by Mrs Guy at 5:57 PM No comments: 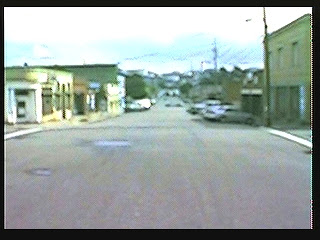 As I was making my way home from the factory the other night, I had an intense OLfactory experience: a skunk smell on the highway gave way to a hint of lemon oil in the finish and memories of the old place. Whoa. I think about skunk too much.

Well yes I do. Only three synapses separate the olfactory nerve from the hippocampus, which explains why smell evokes memory so quickly. But the fact that I had so much to say to myself about the qualities of the smell was a direct result of living in a refinery town for seven years.

What I was smelling was a mercaptan, a smelly sulfur compound. Mercaptans are responsible for both pleasant (grapefruit)and unpleasant (dung, skunk) smells. They are also a byproduct of the oil refining process, and the refineries would release them into the air late at night or when it rained.

I think of them as nasty and dangerous toxins. The refining industry thinks of them as less toxic compounds whose main problem is their ability to cause residents living nearby the refinery to pick up the phone and call the authorities!

And that was me. I was a waitressing night owl back then, and was on a first name basis with the nighttime operators at the air quality control board.

Things improved when one of the refineries closed. And then we moved to the new place and mercaptan isn't part of my life like it once was.