Note: as is my custom of late, I only wrote two posts in real time and then the rest in arrears. I am reposting them in order six weeks later.

Time to switch gears and go to Japan. Despite having put things aside for the trip prior to my family vacation it took until the last minute to finish packing (while watching Season 1 of Hawaii 5-0). Mrguy was my ride, and got me to the airport with plenty of time.


The first flight was fine. I was flying first class, and after having done that I can’t see spending those sums on a short hop flight where they can’t even lavish you with attention. The nice girl next to me had a $2500 LV tote, and I, the pretender, was wearing my pants from Goodwill and a sumo-themed t-shirt that the Japanese are not really enjoying.


The Goodwill pants and I are not quite the same shape at the moment. I was really happy to get my baggage at my first connection and open it to find my belt because my pants were falling down.


Then off to the airport lounge. I served myself a plate of coconut curry chicken and a smoothie and streamed Pakele Live so I could watch Waipuna’s second set. David was on fiyaah! Sad that they’re headed to Fukushima next week when I’ll be in Nagasaki. So near and yet so far. 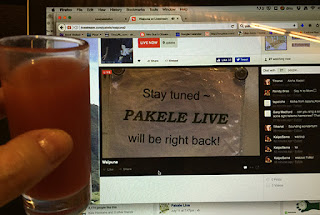 The big flight was ok. Really, if the seat folds flat that’s enough. Anything else is gravy. But I have to say that I asked for a bowl of udon and it was vile. Completely vile. It tasted like Funyun-flavored lawn clippings on noodles. So bad. And I clearly picked the wrong Vanity Fair for the trip. Let’s call it the sex abuse issue. Endless stories of sex abuse. But I watched part of one show in which Matsuko interviewed a guy who is obsessed with gummy candy. I love Matsuko. She’s so imperious. But she’s a big lady and I was worried about all of the sugar she was eating. A person should pass out from eating that many gummies. 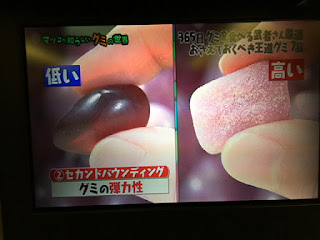 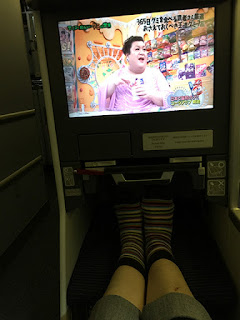 Haneda has been interesting. I followed my colleagues’ instructions on how to navigate the airport. All worked out so well. Found my first Lawsons and bought smoked tarako-centered rice ball, some jello with loquat and a package of sumo baby treats. No idea what it is. AND I found Orangina brand gummies, introduced to me last night by the lovely Matsuko. 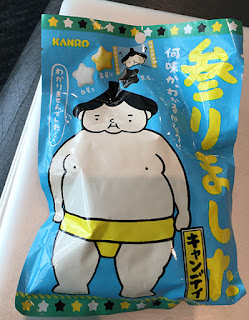 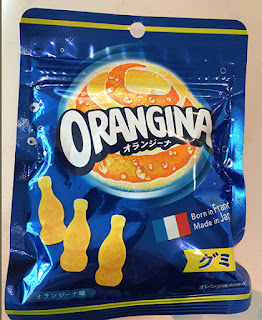 Then I got to security. I’d brought my tools with me, as a safeguard against losing them. They didn’t care about the knife blade, but they didn’t like my tweezers. They made me check my laptop bag, so now I’m carrying a laptop and a hard drive and my binder. Argh.

And now I wait. One more flight and one more bus ride and one walk or taxi and I'm there. All I care about is that I'm in front of a television at 4pm for today's sumo broadcast. I haven't watched live in a while. What if my tv has English language audio? That would be heaven. I printed out the banzuke so I can catch up (there's been a lot of movement in the last few bashos). 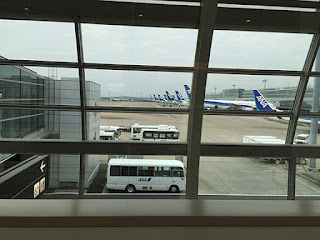 Just got home from the mountain yesterday afternoon.

While looking for something in the linen closet I found the most random box -- baseball cards, seeds, a reel-to-reel recording of an interview with Huey Newton, and an old postcard. On-topic, since I'm headed to Japan today.

No idea what matsuri this postcard below represents, but I've forgotten to mark an occasion of my own -- the tenth anniversary of mrsguy! It's been a good chunk of time, and much has happened. Found my stride at the factory, joined two bands, we remodeled two kitchens and a bathroom, bought and sold a house, lost one cat and gained two, found new passions in sumo (thanks, ex-ms scandiwaiian) and oral history. I became an improv wife (thanks to mrguy) and celebrated our 20th anniversary. I search for skills I need or want and find great pleasure and support in my three teachers (meditation, singing, training). 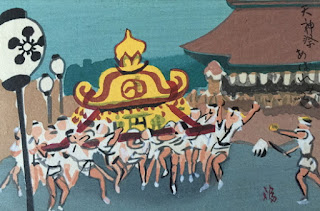 Fear of a Black Planet

Fear of a Black Planet cake was topical, delicious and favored by the people. 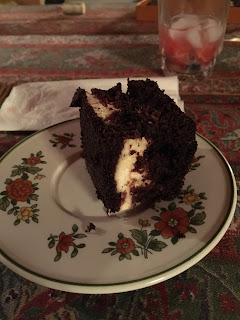 And a new puzzle by Ravensberg is the right mix of challenging and beautiful, without being infuriating. I've done a little of this today, as well as reading a book about Madeleine Albright's brooches.

People who like football are watching the final of the European Cup. 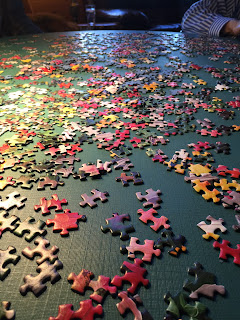 Last night one of my grandmother's ugliest paintings, which she painted when she was 17, found a new home with one of the nephs. I decided to bring this painting with us in order to get at least one item out of the garage. Much is right with the world. 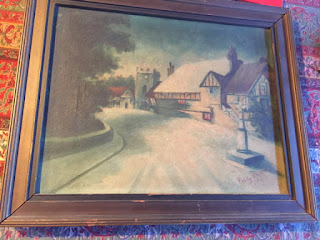 The Republicans Are Awake

The past two days have been fairly quiet and nice. Then horrible world events happened, and how there is a Republican confab at the end of the dining table. I will be taking refuge in Nature now.

Tonight is our night to cook.

We will be making this: 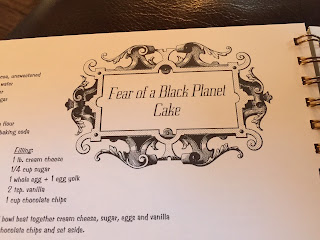 Like I said. I'm eating a bowl and mentally preparing for vacation. 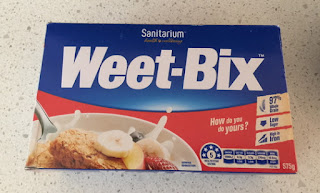 There are certain constants: 1) one sister has a terminally ill cat. This is, sadly, traditional. 2) I have to head out immediately after vacation (last year I had to leave after three days to move the mama to her new place. This year I have to go on a work trip the day after we return). 3) Underlying sibling tension: traditionally during vacation this has been bigsis blowing out over the close relationship between middlesis and I, and feeling left out. But the torch passed to middlesis. It's a good time: one of us will hold back the waves of anger for a few days and then either explode, or light the long fuse and explode / self-congratulate for waiting at a later date. Who knows? Could be me this year.

As always there is mama drama, or a mama-related family project. Two years ago we spent the vacation setting her up with autopay for all of her bills. Last year we spent trying to figure out her health care in her new zip code. This was a group project but god love middlesis for enduring the 3-hour phone calls with the HMO. Finally, it is customary for us to have lengthy and un-fun family pow-wows about family business, our family trust, whatever, because we siblings aren't often in the same place at the same time.

This year I am mixing it up. Less tension and planning beforehand. More deep breathing. More participation, perhaps?

Today I dispatched the remaining two dozen or so bananas that I had retrieved from the ancestral chest freezer. Readers of mrsguy may recall that when we cleaned out the house last summer there were more than 40 frozen bananas found lurking. We now have two loaves of banana bread and some banana drying in the dehydrator. Our house reeks of bananas! There are worse things. 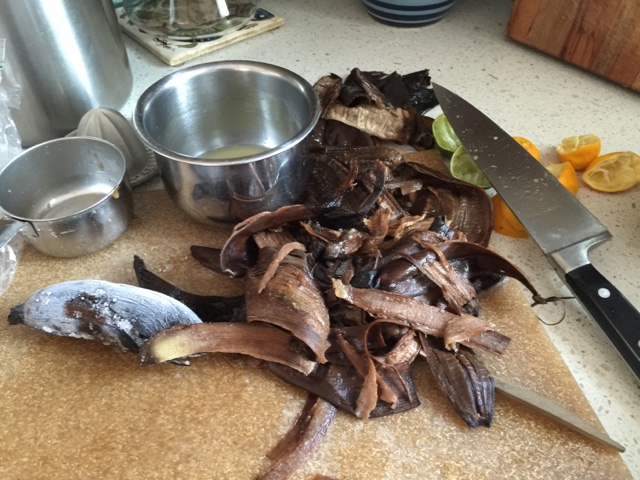 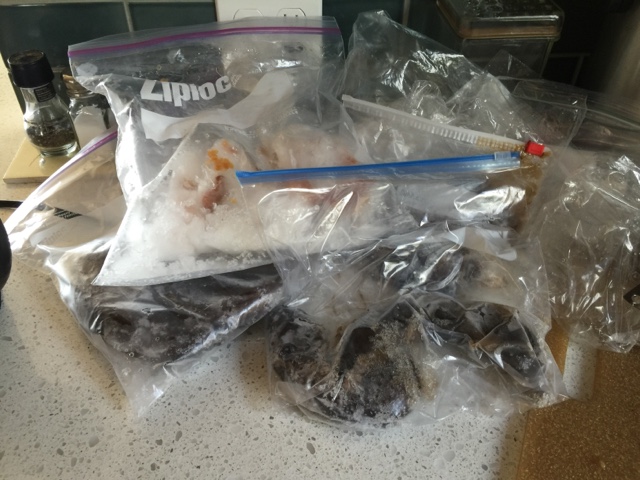 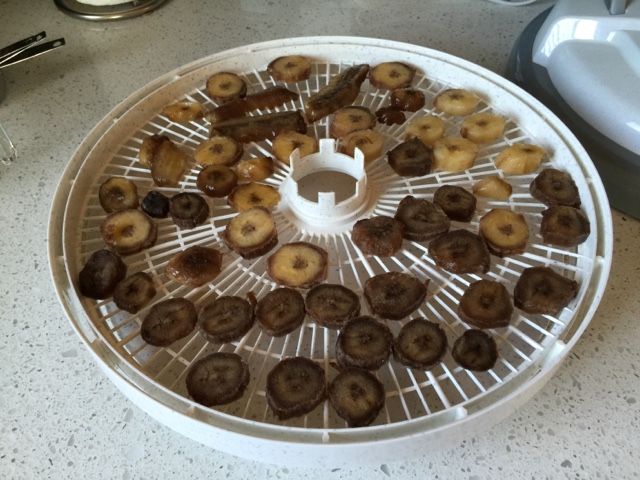 And I had company in the kitchen. In the previous incarnation of the kitchen she would observe from her perch on top of the garbage can. We've hidden those but bought her stools to sit on. 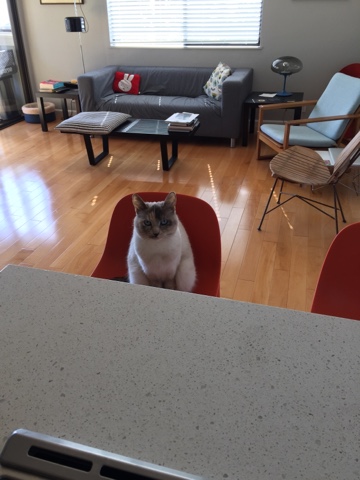 The dehydrator was a modified success. Needs more drying time, I believe. I care not. And mrguy is so pleased to have a banana-free freezer.
Posted by Mrs Guy at 9:38 AM No comments: