In one of the best news stories of the day...this Thursday, an artist viewing a Cy Twombly exhibit in Avignon was inspired to plant a big old smoochy on one of the paintings.

I'm dying to know what lipstick she was wearing. The conservators will want to know too :)

I don't really care much for Cy Twombly, but I have a small dab of Rouge de Fete by Dior that I save for special occasions. Those Brice Marden color field paintings sure are kissable! Too bad the exhibition has moved on.

Artists. They're different from the rest of us.

I know it's summer because:

I got an outrageous sunburn yesterday without meaning to. Yes, this is blurry, but you try to take a picture of your crisp chestular area in the mirror while maintaining a semblance of modesty!) 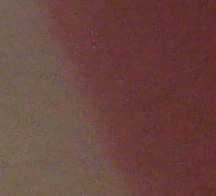 And we have wicked ants everywhere, including sometimes our pants. What the heck are they doing in my bureau? 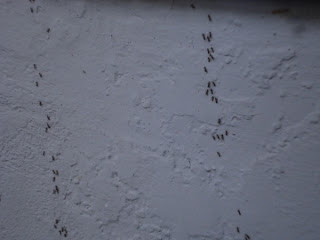 And this morning I ate a juicy peach over the kitchen sink.

Summertime in the City of Pride and Purpose.
Posted by Mrs Guy at 11:46 AM No comments:

A survey of my collections reveals that I was incorrect. There are actually three titles for Hawaiian dollar records. One is Hawaiian Favorites, one is Hawaiian Holiday, and the third is Holiday in Hawaii. Holiday in Hawaii is the one that officially kicked off my love of "Hawaiian" music, although growing up in a town with a beautiful tiki restaurant didn't hurt, either.

My original Holiday in Hawaii: 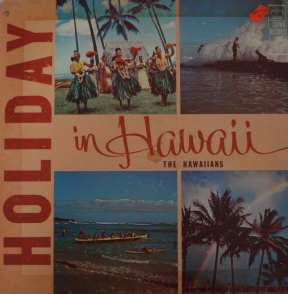 And three records called Hawaiian Holiday. The last one credits British West Indian Airways for the photograph. Nothing quite says Hawaii like pictures from the West Indies! 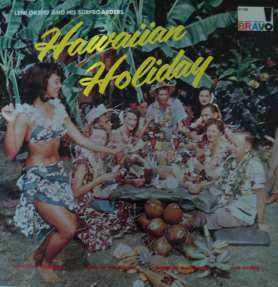 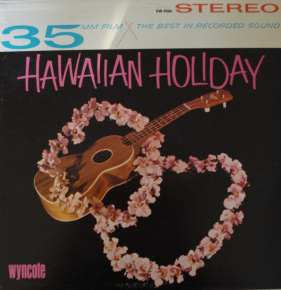 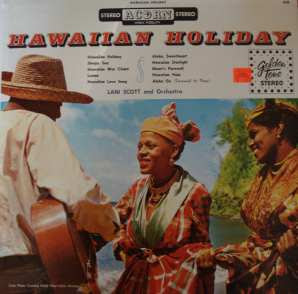 This week's catch turned out completely fabulous: the recording itself is of pseudo Hawaiian wacky Speedy West style slurpy steel, and the music is a rip off of compositions that everybody knows, given titles that would not raise the eyebrows of someone looking for royalties. Would you suspect that Hawaiian Love Thoughts was Blue Hawaii? Anyway, the jacket is almost better than the music.

Did you know that recordings on the Curio label have tonal qualities paralleled only in the most expensive recordings? Well you do now. Curio is the kind of company that will tell you the brand of mics that were used to record, the specs for the lathe that was used to master, and will let you, the owner of a Curio recording, know to periodically clean the record with a soft cloth. They won't tell you which band made the sounds on the record, but whatever on that small detail. I can't wait to listen to side two.
Posted by Mrs Guy at 10:52 PM No comments:

Disastrophe is a word that should exist that a dear friend of the family used today. It has nothing to do with the answers to Thursday's Balderdash questions:

Second Time Lucky
1) God and the Devil make a bet that if the earth was reformed, Adam and Eve would make the same mistake again.

In other news, our nephew mr randommeats has asked mrguy to be a guest brewer at Oktoberfest. Such an honor.

It's so nice to be in the boosum of the family.

Balderdash. Answers, and Round 2

Round 2 commenced yesterday. What's remarkable about playing with the gene pool is that there is a certain stylistic similarity in some of the answers.

Six Lessons from Madam La Zonga:
1) The story of a child growing up with his estranged aunt in Spain after tragicaly losing his parents.
2) A twenty three year old kid headed for trouble is taken under the wing of his great aunt who gives him his last chance as a waiter in her New York City bistro.
3) A coming of age comedy about a riverboat psychic and a troubled teenager.
4) In this French foreign legion-based take, a high ranking soldier comes face-to-face with his destiny, foretold by Madame La Zonga.
5) A Cuban night club owner causes trouble on board a cruise ship
6) Depicts the events immediately following the end of the Spanish-American war.
7) An orphan is given over to a Baltic fortune teller for upbringing.

Second Time Lucky
1) God and the Devil make a bet that if the earth was reformed, Adam and Eve would make the same mistake again.
2) A former convict uses the law degree he earned in prison to overturn his conviction.
3) A comedy about a recently divorced bus driver who takes a trip to Atlantic City and finds true love.
4) A down-on-his-luck bookie wins the New York state lottery and uses his winnings to purchase a race horse that changes his luck and brings him fame.
5) A story of a blind daughter who helps her father and mother's business be the most successful fishing business in Florida.
6) In this rollicking comedy, a servant to an international real estate magnate dies and is reincarnated as the house cat.
7) Whodunit caper set in a divorced singles card room.

Rant Mullens
1) 86-year-old mountain man who whittled large wooden feet so he could scare people with his Bigfoot prints
2) The world record holder for the longest crabwalk
3) Held the world's record for hiccuping -- he hiccuped for two years and five months.
4) Owner and proprietor of The American Sanctuary for the Manatee in the Florida Keys.
5) Started the zoot suit craze.
6) Invented the nozzle used to dispense sodas in bars
7) One of Doris Day's husbands

Answers in this space tomorrow. Here are yesterday's answers:

In Arbor Village Maine, an old law prohibits a policeman from sticking:
1) out his tongue in the direction of a dog

Butwink
2) A variety of bird

The Day the Fish Came Out
3) Sci-fi satire starring Candice Bergen about a plane that crash lands on a Mediterranean island.

It took three days for us to be ready for Balderdash.

Here are the submissions. Answers posted in this space later:

In Arbor Village Maine, an old law prohibits a policeman from sticking:
1) out his tongue in th direction of a dog
2) his billy club in the freezer to further harden it for use
3) a "condemned" notice on the front door of a residence
4) his horse's head through the window of a carriage without announcing himself to the driver

The Day the Fish Came Out
1) In this docu-drama, a pro bass fisherman snags a prized trophy, only to discover that he was not officially registered for the tournament.
2) 50's sci-fi thriller depicting the uncanny results of the H-bomb rests -- fish grow legs and seek revenge.
3) Sci-fi satire starring Candice Bergen about a plane that crash lands on a Mediterranean island.
4) Tells the story of Absalom Fish, a first year divinity student, who must decide between his faith and his talent for ballroom dancing.
Posted by Mrs Guy at 11:55 AM No comments:

This week I learned that mrguy once ate beef stroganoff with the Ramones.

Brushes with greatness just don't get much better than that.