Oh the roller coaster that is house hunting!

We actually put an offer on a house last week, but were outbid. I really liked the house, so I've been trying not to be too bummed about it. We forge ahead, right?

Just to raise my spirits, I asked our agent if we could go see a house that had initially piqued my interest in looking for a new house. We hadn't looked at it before because it was occupied, possibly in a slide zone and because the place we eventually bid on was so much nicer.

The first three rooms were great -- sunken livingroom, groovy entry, floating fireplace, nice dining area. But to get to the dining area you had to walk past a laundry drying rack sporting a jaunty array of ladies g-strings, which were airing brightly in the sun. Whee!

Every bedroom had a shrine and special talismans and in the bathroom there was a laminated card taped to the wall over the toilet paper dispenser as a reminder to give "the bodily impure fluids" to the hungry ghosts. Different incantations for donations of spittle, mucus, feces, urine and "general impurities" were listed.

That was a first.

Anyway, the slide zone location was all too apparent. The floors were all a bit wobbly. And as I'd noticed on Google Earth, the neighbors had a batting cage right on the property line (as you do).

We continued the search yesterday, just to refine our likes and dislikes. Despite the disappointment in not getting the first place, I was buoyed by the fact that we really aren't stuck on one style of house. We looked at a contemporary house in the woods, a mod house that sat cockeyed on its lot in a very beachy vibe, and a house with a pushy listing agent who scared us off. All of them had some appealing elements. I know we're going to end up with a place we like at some point.

Again, we forge ahead.

Saturday
Posted by Mrs Guy at 2:51 PM No comments:

As The Crow Flies


There was an amazing glass box on stilts that looked very appealing in the listing. When I saw it in person...not so much. It looked like it needed a ton of work, and the listing agent was boasting loudly about how the owners got one inspection that said the house needed 66k worth of work. And then they got another one saying that it was only 6k worth of work. 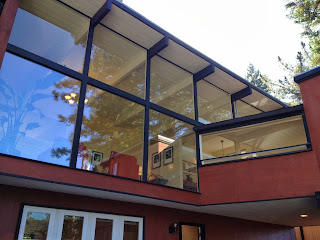 We looked at another house that was truly amazing. It was suspended from 4 giant beams, and located on an 11,000sf lot full of trees. It had built-ins and was very womb-like. We met the architect.


But it was too open and small. It had lots of woodshop-y rooms, but not as many livable rooms. Such an amazing space, though. I just wanted to open a book and fall asleep on the couch. 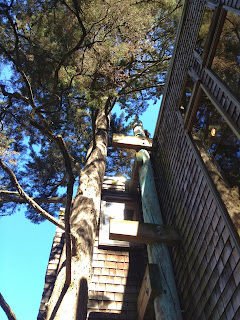 After our adventures in the woods, mrguy said he's over that neighborhood. "As the crow flies, it's not very far from work for you," he said. "But as the crow drives in the crow's car, it would be kind of a pain."

Tomorrow we put a bid on my first love, the house with the laundry room and the cat room.

I love my little house. The kitchen is sweet, and just to my taste. The bathroom, too.

But there isn't enough room for mrguy and I to do the things we want to do. At least not at the same time. I'm not fed up or unhappy, but about a week ago I got serious about acknowledging that it's time to look for a new place.

This is what I want:

1) A lady room for beads, my Etsy store, my genealogy files and as much Chinoiserie as I can possibly acquire
2) A place where I can have my bass out all the time
3) Enough room so that my ukuleles don't have to share the credenza with my socks
4) A room where I can sing without feeling like I'm disturbing someone
5) Storage that doesn't involve the hallway
6) A view of something
7) An extra room where visitors can stay over comfortably. That should be top of the list, actually
8) More walls for more art
9) A place to exercise that isn't in the middle of the house
10) A place where I can watch tv without disturbing mrguy
11) A room where we can access our vinyl easily

Some, if not many of these spaces can be the same space. I can do without all of it. I can even live in less space than I have, but for right now I believe that more space will lead to a happier life. We can always downsize.

We looked at a house together yesterday. It has all of the above, plus a room to put the cat box in, and a laundry room. And two decks. We will put a bid in on it, but I'm pretty sure that it will go to someone else. And if it does, that's o.k. Our trusty agent knows what we're looking for and thinks that there is more coming on the market soon, possibly in the off-season. We love to shop in the off season.
Posted by Mrs Guy at 11:04 AM No comments:

Readers of mrsguy may recall that our former Albertsons was blighted for many years, and that I kinda liked the blight sometimes. 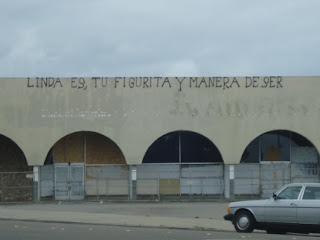 Recently, our two defunct supermarkets were transformed into a 24 Hour Fitness and a Canned Food Warehouse. They can call it Grocery Outlet, but they're not fooling me. Anyway I loooove the Canned Food warehouse and having one in the neighborhood pleases me to no end. I feel like I'm going back to my roots!

Back when I was broke, but before I was poor, I went to the Canned Food Warehouse in the city all the time. It was partly functional, since I needed groceries and hated regular supermarkets. But the entertainment value of the items I brought home was off the charts. Here are a few of CFW's greatest hits:

1) Meeter's Kraut Juice. The label is so beautiful that I bought dozens of cans and placed them on top of my kitchen cabinets as decorations

2) HammerMan toothpaste. Because nothing says Hammer Time like grape or blueberry scented breath. This became a centerpiece of my toothpaste collection.

4) Dear Lady! brand pitted cherries. The label featured a little cartoon man holding up a sign that said Dear Lady! I later tried to buy more to use as vases for a friend's wedding reception and ended up having a complete adventure, talking to the folks at SnoKist Growers in Yakima Washington and getting a set of their other labels, instead. The tables looked great, but the marriage didn't last.

This week it was the first time I'd set foot in the CFW in years. It did not disappoint, except that it was kinda upscale. I prefer a grittier experience, but it was really nice. I even got totally bourgeois kombucha for a buck a can. Plus, I don't know if you've noticed that Cheez-Its are a complete rip-off these days and I got a full-sized box of Spiderman Cheez-Its for $1.69.

People, it does not get old. Even if I won the lotto I would not turn my back on CFW.

Hot Child in the City

Thursday's karaoke fest in honor of our dear bandmate, who is soon to get married, was a silly success.

My karaoke experience is limited. I'd never done karaoke in a private room before, and I arrived as the party was in full swing. There was pizza, popcorn, wine and tambourines, and the ladies were killin' it as I opened the door

Song selection is always funny with the ladies in my band, because there is a 20-year span between the youngest of us and the oldest of us. But it's super fun to think of songs that I heard in my 20s, that they might have heard in elementary school. Or they know the cover, but not the original. Anyhoo, we just had a great time singing and dancing and we wound it up with a rousing version of Teen Spirit.

It is a proven fact that my ladies know how to rock.

One of my favorite things about the experience was the videos that play behind the lyrics. The karaoke joint is in a Korean mini-mall close to the forklift factory. Therefore, the videos are...not like anything I'd seen before. When I arrived, it was just the legs and undercarriage of a tortoise, as seen at ground level. Another scene was a daddy fish, with a mouth full of eggs (i.e. his children). Occasionally one would float away. Then there were sea turtles...doing it. And clownfish swimming in an anemone, whose tentacles looked like fingers. My favorite, however, was people in native garb on a trek in the mountains (Himalayas?), with their belongings on water buffalo (yaks, maybe).

I leave you with some photos. 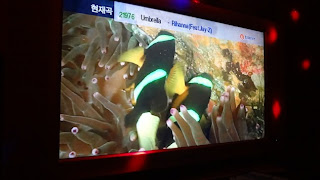 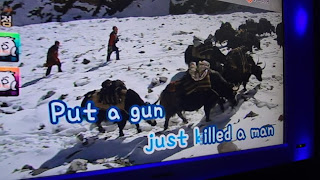