Overheard conversation between skinny girl with pink hair and man whose pant legs were so wide that each one could be her dress: 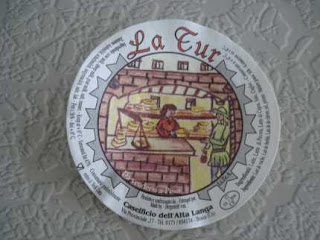 I hope that in a few years when I am old and have to stop eating cheese that I find something I like just as much to replace it. That's not going to be easy.

I grew up in a household of Colby cheddar, the cheese calendar punctuated by the occasional appearance of yummy smelly Liederkranz. As an adult I toyed with Limberger (favorite catapult projectile of the Little Rascals), and came to favor goat cheese during my restaurant years. When I was in the interview process for the forklift job, I remember thinking that if I got the job I would always be able to have a log of goat cheese in the fridge. Still love cheese that much. On crackers. On spaghetti. Studding my chili in a configuration that mrguy calls "Cheese Stonehenge".

Yesterday, when my travels to the not-open-on-Saturday typewriter repair place took me past the cheese store, I stopped in. Last time I went there I struck out with a cheese that seemed to be on its last legs: smelly, grainy, bitter Danish somethingorother. I hate to waste cheese, but I let it fester and then threw it away. Despite my error last time, I took my chances on a runny round of La Tur. It sat in a cupcake paper inside a plastic cup that was further shrouded in saran. It looked dangerous.

Last night I opened it up and dug in. When I cut into the rind, the outsides disintegrated into rivers of smelly cream. The aroma filled the kitchen. I put it on some fancy crackers and mrguy said "You first". Oh my gosh it was good. Smelly but goaty, with runny outsides, cake-like insides (a texture that's not to be believed). I guess you're not supposed to accompany it with homebrew, but boy that was tasty.

This morning I woke up and all I could think of was that cheese. It wasn't so photogenic after I poked at it and carved it, so I offer a picture of the label. 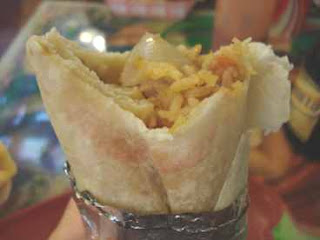 In this neck of the woods, and among the musical peeps of our acquaintance, a person's favorite burrito is a relationship-defining preference. I have sat through burrito meals at other places, like the place that has deep fried lard points, and the popular place that has peas in their rice and all sorts of citified meat substitutes, but nothing satisfies like The Peak. Nothing.

I went there on a first date with a boy who served me my first heartbreak. Relationship didn't last, but burritos are forever, or 23 years, whichever is longer. After the breakup I'd drive an hour from school just to come to the city, eat my burrito, go to Polly Ann's for an ice cream, and go to the beach.

After I met mrguy, the time came for our first burrito together. I played it cool. "Let's go to %^(* La Cumbre," I said. Big sigh of relief from the driver's side of the 1953 Plymouth Cranbrook. Turns out that there is no other burrito for mrguy. I already knew *he* was the one, but this was just another clue :) Turns out that this was the official burrito of his old band. And it is also the official burrito of his current combo with Mrguy South, who would kindly bring us our burritos across the bay when he'd come this direction. That's friendship.

These days we don't get to The Peak very often, but we had a burrito and electronic music evening a few weeks ago that reminded me why I love it so. Lipstick on burrito.

The vision of happiness.

I wish that the perfume of mrguy's hops for his Oktoberfest brew were transmittable via the blog.

I also wish that the rich egg-like stench of the beer which is either brewing or festering in the Man Room were similarly transmittable.

I hear that this is what this particular hops does when it's doing its magic. 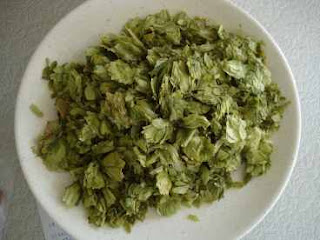 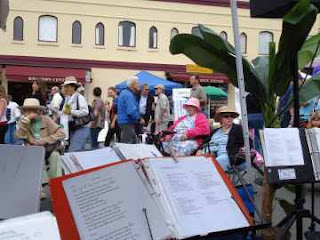 Today's the anniversary of the following story. Could have been 1997, or 1998. Doesn't matter.

As I may have explained, the Old Place was weird and magical and sometimes scary. What was a lovely funky place to live in at first became denser and more marginal over the 7 1/2-but-who's-counting years we lived there. Some of the neighbors were pretty creepy, including the one we refer to as "Hair No Grow."

The story of the moniker came from my brother, who took a position as a traveling nurse in St. Croix. He cut off his manly mane before going, hoping to fit in, and soon after he got there, a stranger on the street turned to him and said pityingly "What's the matter, man? Hair no grow?"

A few months after my bro told us this story, an intense burly guy with a shaved head moved in kitty corner to us, and Hair No Grow is born. He had a girlfriendwife and a child and a really awful band that had precisely one song that had two chords, one of which seemed to be in the same tuning as our house and would rattle the walls. I had a little song I'd sing to the tune, which went like this: "I GOT no hair, and I GOT no hair, and I GOT no hair, and I STILLGOTNO hair" (please mind the syncopation on that last part if you're playing along at home). I was mildly afraid of him but wasn't sure whether I was more afraid of the sheriff who was really far away, so we didn't call in noise complaints too often.

One Labor Day morning, mrguy and I were drinking coffee in the back yard. HNG's back window was open. It was hot already and it wasn't even noon. One of his childpeople started messing around with the drum set. Then the words "Kids! Stay AWAY from the HEROIN" rung out across the tiny yard. I looked at mrguy. Did I just hear that? Before I could ask, we heard "Stay AWAAAAY from the HEROIN!!" Holy cow. We went back inside.

Some time after that, we were having a garage sale at my sister's old studio across the street. We could see a stack of papers blowing about, tacked onto HNG's front door. He didn't seem to be home. I couldn't help myself. I ran across the street, opened up his screen door and had a look. Seems he wasn't the only ne'er do well in the household. His dolly had a warrant out for hitting a traffic pole and then splitting on foot. I don't remember what the other notices were (probably eviction).

We never saw them again.
Posted by Mrs Guy at 10:25 AM No comments: 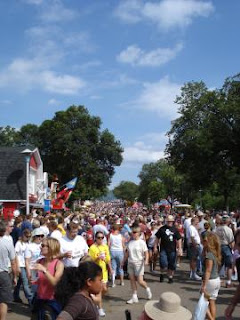 In the days leading up to our visit, I read most of the State Fair website so that I could develop a plan. Most of what's described here was on my hit list :)

First I wanted to see all the stuff on a stick. We saw teriyaki ostrich, hotdish, Pronto Banquet on a stick, gator, and Scotch eggs. For sheer cuteness and how'd they keep it on a stick-ness, this was my highlight: 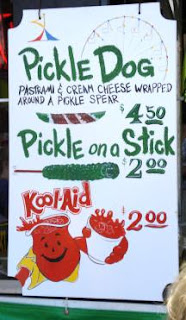 Sadly, due to the events of the Scrabble party the night before, I wasn't in the mood for carny-fried mystery victuals, so I had nothing on a stick until right as we left I bought a frozen banana. I believe this is cheating, because I'd have that banana anywhere anyway.

I made a stop over to the Minneapolis Star Tribune shack to introduce myself to James Lileks, whose website I've enjoyed for almost as long as I've had access to a graphical web browser. Nice guy. Funny in person. Discussed moleskine notebooks, since I had my personal book with me at all times during the fair. Disagreed with me about whether the Headhunter category in the gladiolus competition was going to reflect headhunters or not. That was cool.

Moving along, we made a visitation to the Princess Kay exhibit to see a Butter Princess' likeness being sculpted. That was tremendous. The chilled booth rotates slowly, and the princess and the sculptress do their work. 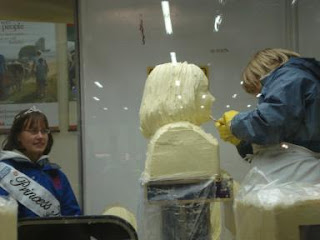 The Ag-Hort-Bee building is where I pinned most of my hopes. There you find the bee exhibits, crop art, flower displays and vegetable competitions. We saw squashes so huge that they resembled large sleeping animals: 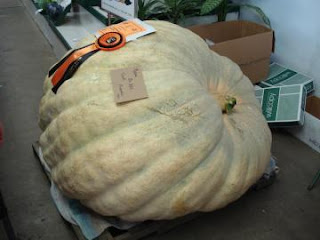 The bee exhibits featured a hive behind a screened off area. You can put your face near the screen and feel the wind of their wings and smell the bees' sweet grainy aroma. Who knew?

The seed paintings in the Crop Art room were worth a visit. The Colonel Sanders was the best of the bunch, but the political ones (Al Franken, running for senator, rendered as Stuart Smalley; Dick Cheney depicted in beans as the root of all evil) were pretty great too. 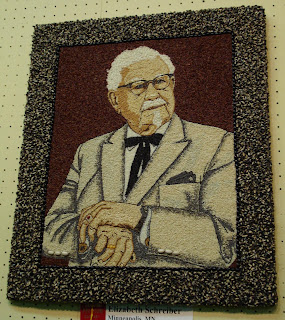 These were the expected pleasures, but there was more to love. We happened upon the tiny tiny tiny tiny horse judging competitions. I saw the most beautiful cow in the world. The craft booth had a dress someone had made in the theme of sock monkeys.

And there is a competition in which people collect post cards and arrange them around a theme. The loveliest was titled "Transportation by Eggshell," and was a selection of Easter cards in which chicks or little people were shown being transported via egg zeppelins, boats and carriages. So sweet.

I only ask that my bra do these things:
This isn't much to ask.

Issue 1 is easy. Few bras sit atop the basic area without offering coverage. Issue 2 can be tricky, because strength of material sometimes leads to visibility, which is a violation of the third requirement. Issue 3 is a biggie. The bra item has to fit well enough that there isn't puckering, can't have so much lace that it looks like your frontals are warty, and must not have flappy straps that wander into the field of vision.

So at Nordstromia at the Mall of America I happily worked my way through the selection to find some good candidates. I passed on padded (at my size, who on Earth wants extra padding?) I passed on extra warty lace, or crazy colors that will show through anything. Eventually, I found two serviceable bras that I'm wearing quite happily. Now I need a new rule for buying anti-gravity devices:

I must be able to put it on myself.

Somehow I managed to get it on in the dressing room at Mall of America, where everything is beautiful and wonderful, but now I can't get the things on without an assist.