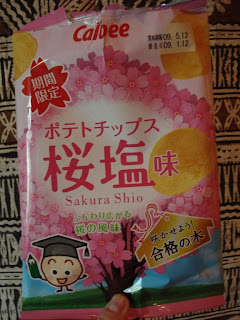 While shopping for Oskah! goodies at the fish store, I noticed a new package in the chip aisle: Calbee Sakura Shio.

It's subtle and delicious, almost like a crispy potato shortbread. It contains cherry leaves and plum, and is vaguely perfumy and faintly sweet, but not overpoweringly so.

This is a seasonal special, so make sure to grab some when you get to your Japanese market.
Posted by Mrs Guy at 2:25 PM No comments:

Chin Ho In The House

It was one final interesting day driving the mighty Chevy Cobalt.

Lack of a locking gas cap meant that I filled up this morning *and* this afternoon.

But that's over, the Cobalt has gone back to Hertz.

Chin Ho is home and as beautiful as ever. I wanted to kiss him, but he's a car.

Repairing my body will take a little more time but I, too, am on the mend.

[update 2/21/09: I turned on the stereo for the first time today, proving my theory that the accident happened to the tune of Kaulana O Hilo Hanakahi. I couldn't get that song out of my head for days afterward.]
Posted by Mrs Guy at 6:10 PM No comments: 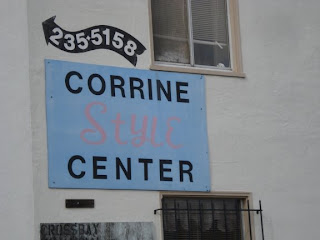 Being a piece of furniture for cats.
Posted by Mrs Guy at 1:32 PM No comments:

The last day in Hawaii always ends up being a road trip.
First, we were jonesing for some nature. We'd hoped to snorkulate at some point, but the weather turned rainy and that wasn't possible. As a substitute for watery pursuits, mrguy found us a walk to take in Koko Crater. There many plumeria to enjoy, but one of the best items we saw was this bush with large, oddly-shaped fruit. 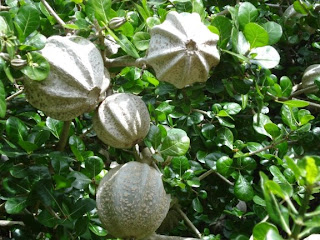 After Koko Crater, we made our way through Waimanalo, stopped at the nut shop again, and did a photo op for the girl band. AM940 played The Gabby Band's version of Ipo Lei Manu as we passed through town.
One of our goals for the day was to see the site of the Marconi wireless telegraph plant in Kahaku because of this article we'd read in Hawaiian Airlines magazine. This destination was also in keeping with our interest in electricity and other technologies coming to Hawaii. 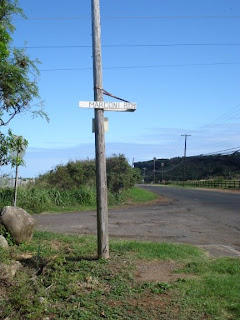 Once in the North Shore, we stopped at Banzai Pipeline beach. I spent most of my time at this stop peeling one of Senator Fong's enormous pomelos that had been our mascot this day. Other tourists began to watch me, as I struggled somewhat to pry it apart. Ouch! Eventually I asked mrguy to help. It was delicious, like a delicate and perfumier of grapefruit. 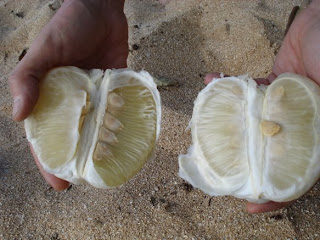 Next we stopped for turtles, which are near and dear to ms scandiwaiian's heart. There were more turtles at the turtle beach this year, and some were bobbing around in the surf. I'm not the turtliest person around but seeing them in the wild like this, swimming in the surf and eating limu off the rocks, for crying out loud, was really great. Occasionally we'd see a flipper break the water, or a head would rise to the surface and we were close enough to be able to see the pattern on the turtle's neck. A big monk seal slept on the beach and periodically scratched himself or blew the sand out of his snout. It's a seal's life, I tell you.
Before dinner in Kaimuki, we made another Goodwill stop. Mr finn kindly let me buy these awesome glasses that he'd found. Mrguy made us a potion in them later that evening. 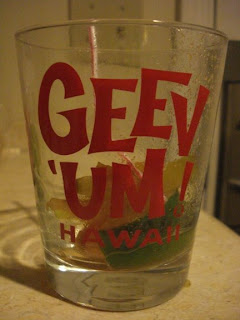 And so concludes Hawaii 2009. A happy, yummy vacation with wonderful friends, music, some turtles, lots of fruit and a tip of the hat to technology.
Posted by Mrs Guy at 12:41 PM No comments:

We checked one item off our bucket list on Tuesday by taking the tour of the Hawaii Theater.
Built in 1922, it's been recently restored and has terrific acoustics. One of the best things about the theater (aside from the acoustics and the dedicated volunteers, one of whom is a phenomenal pipe organ player) is the name of the company that built the theater: Consolidated Amusement.
Ripe with meaning, that name!
After the theater, we found some good noodles at a place that may have been called Vietnam Cafe Pho Saigon. Not quite as good as Pho 97, but the salad portion of my goi ga was delicious. And the preserved lemon drink was zippy and not too sweet.
I saved sweetness for later, when on a lark I bought a La Lucky Bird's Nest Drink. A newcomer to the birds nest fungus drink, I don't know how it stacks up against the competition. It tasted a little like a marshmallow dissolved in water. If you like vanilla and unexpected beverage nodules, this is the drink for you :) 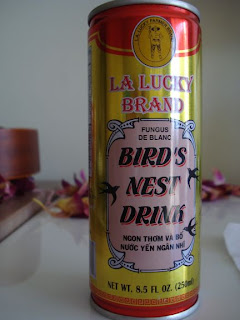 The Honolulu Jelly's was our next stop. More sumo books were purchased.
After resting a bit, we popped over to Matsugen for dinner. After dinner drinks were of our own creation: gin and tonics featuring Tahitian limes and tangelo.
We said hello to the sausage trees on the way home.
Posted by Mrs Guy at 12:13 PM No comments: