Robert Downey Jr. was a roommate at my mom's house.

He clogged every toilet in the house and didn't deal with it.

My other roomates were really angry.
Posted by Mrs Guy at 9:59 AM No comments:

A Brief Interruption For Christmas 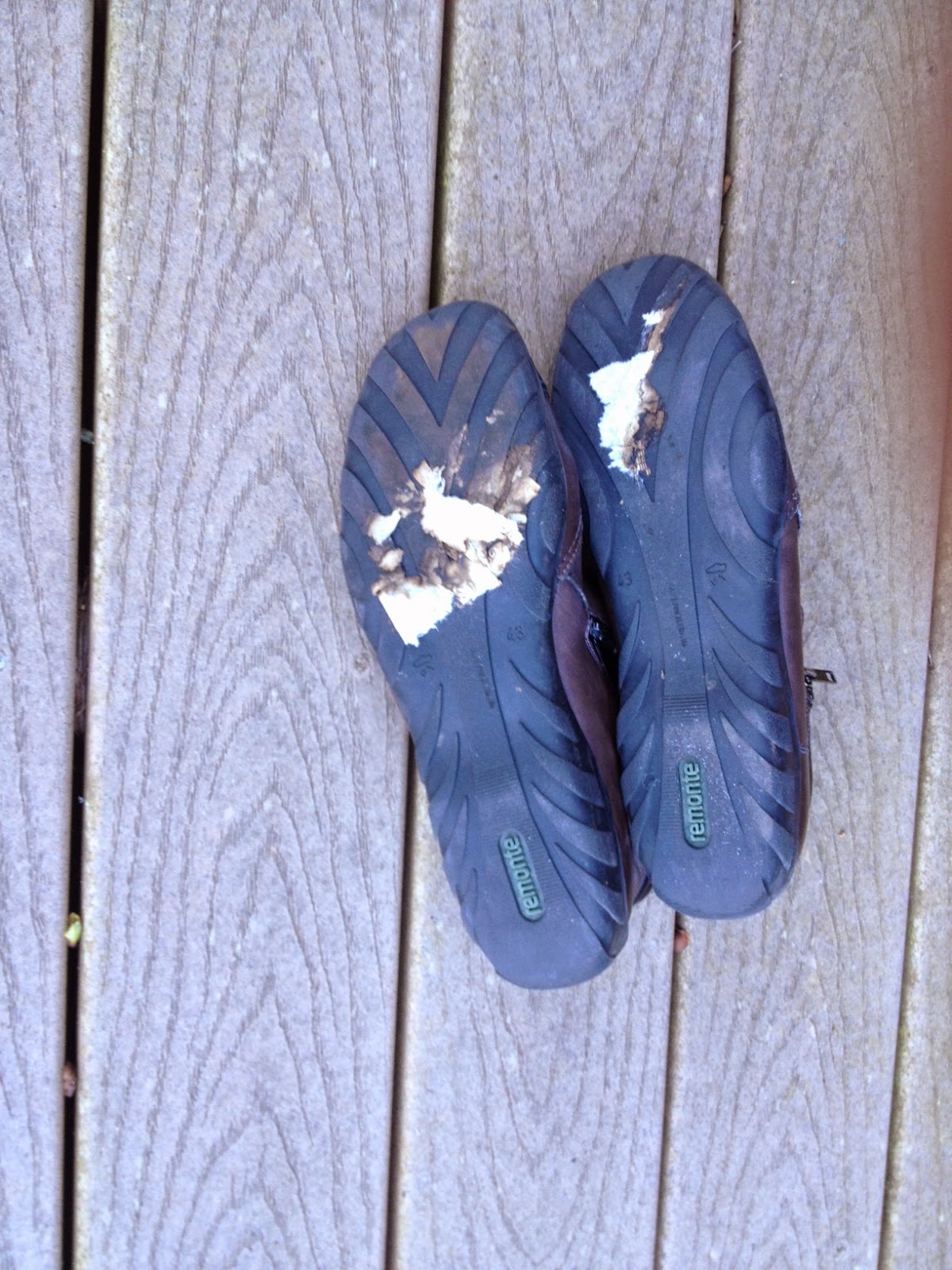 This is why I don't like paper napkins at Christmas -- cloth burns so much more slowly!

I was chatting with my nephew's wife at the table after dinner and I looked to my left to see a napkin start to catch fire from a candle. I grabbed the napkin and started to move toward the front door, but the breeze from my motion fed the flames. "Stop, drop and roll," right people? I dropped the napkin to the hardwood floor and stamped on it. I think it might have melted the bottoms of my shoes a little bit.

The floor took no hits, the white carpet is fine, and many in the room missed the excitement.

A few more notes about day one in Cologne.

You can see the cathedral from everywhere. 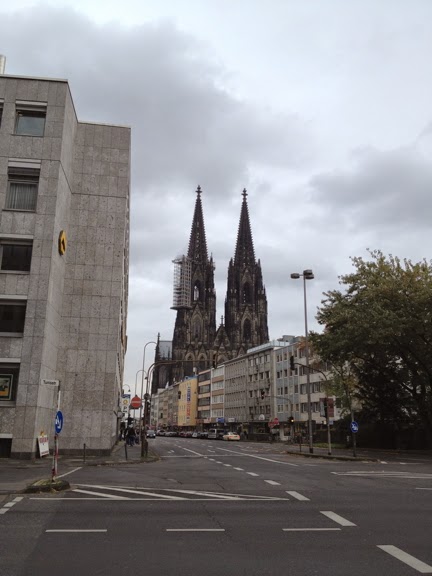 We are in love with this modern building by Karl Band. It's a religious vestments store. Check out the door pulls! 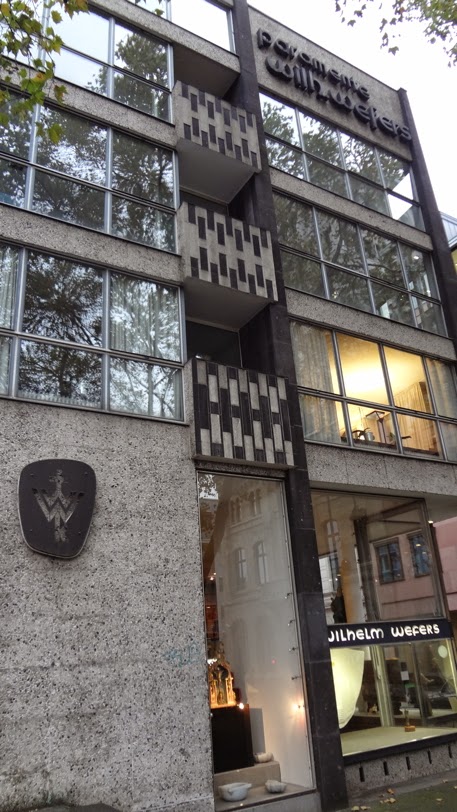 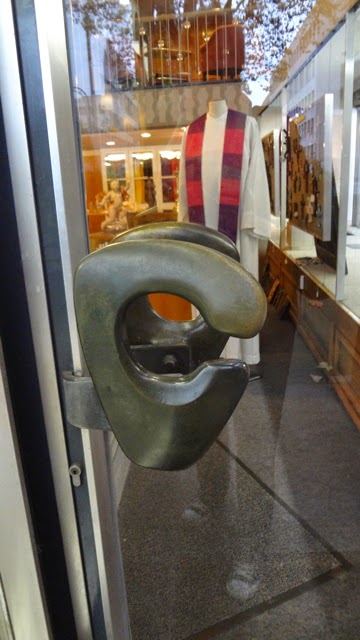 This little fountain was on our walk: 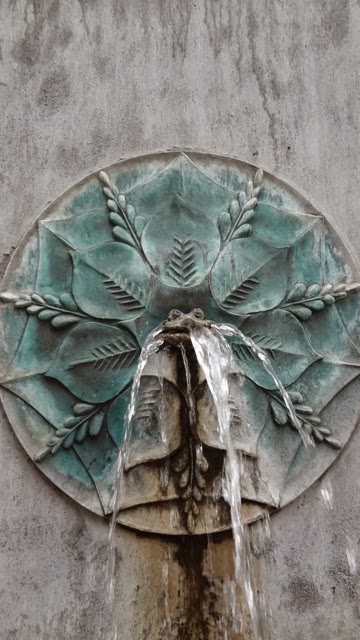 So many beautiful things to see.
Posted by Mrs Guy at 11:58 AM No comments:

Does this really count as day four? It's our first full day in Germany.

This morning we woke up and caught the train. 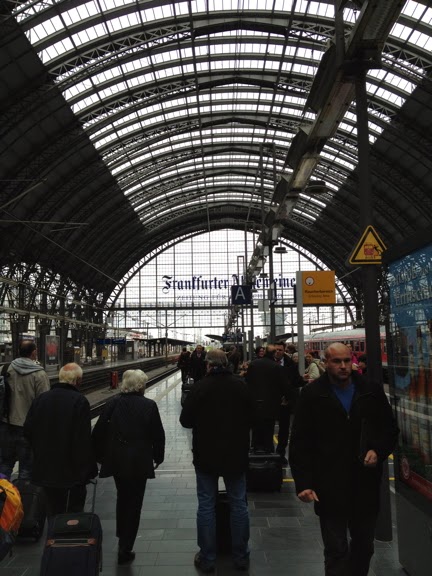 The train trip was excruciating because I was so tired, and so excited that I couldn't sleep because outside my closed eyelids was Germany and I didn't want to miss anything. The train ride from Frankfurt to Cologne runs along the river, and it very much reminded us of the ride up to Garrison from Manhattan on the Metro North. It was so beautiful that I really struggled to stay awake.

Our hotel in cologne is right near the 4711 museum. Upstairs in the museum they play old commercials from various eras where men and women douse themselves with the stuff. Mentos clearly owes a debt of gratitude to 4711's 1970's commercials. 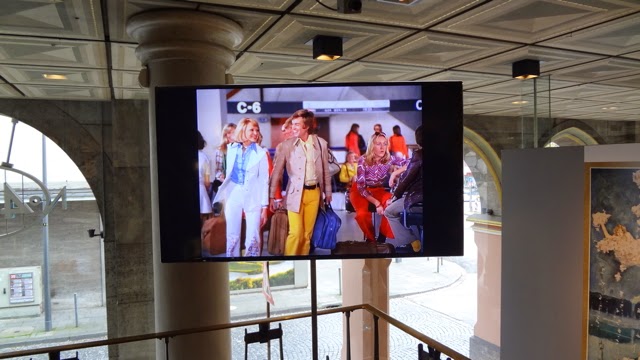 The cafe next to our hotel (Cafe Printen Schmitz) makes yummy gingerbread, and a place nearby makes Weckmann. I am now hereby going to eat man-shaped food for the rest of the trip. 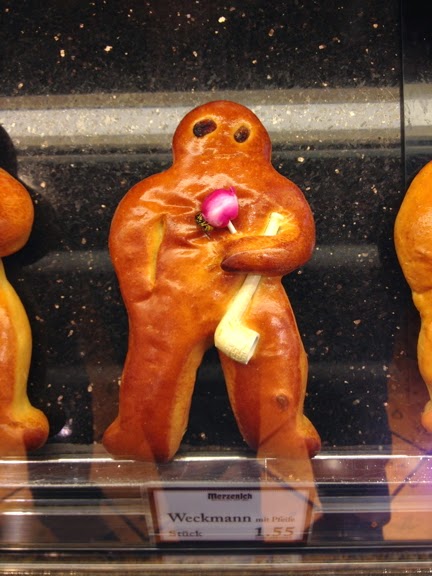 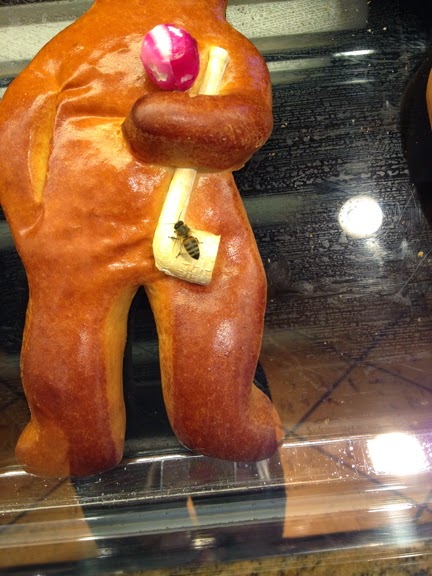 I ate it even though it had this bee on it. All the Weckmann have bees on them.

In our first day discoveries was also an antique store called Loft. I bought two amazing linen backed instructional aids that show how insects pollinate orchids and how carnivorous plants trap flies. Now I have to figure out how to ship them home.

Now off to dinner somewhere...

(in which we actually get to Germany)

The flight was lovely and uneventfull. I overindulged by watching  documentaries about Shep Gordon and Bert Stern back to back. Rich white guy stuff.

Our hotel is so beautiful and it seems a waste to be here one day. Thanks, Lufthansa pilots!

It was super nice to take a shower and get out of Monday's clothes on Wednesday. We hosed off, so to speak, and headed out to see the sights. Over the footbridge from the hotel is a beautiful neighborhood, very much like the Lower East Side.

Frankfurt is known for its Applewein, which is a tart unsweet cider. We wandered around the neighborhood, finding a restaurant / bar that specialized in it. The exterior ornamentation on this place was unreal. 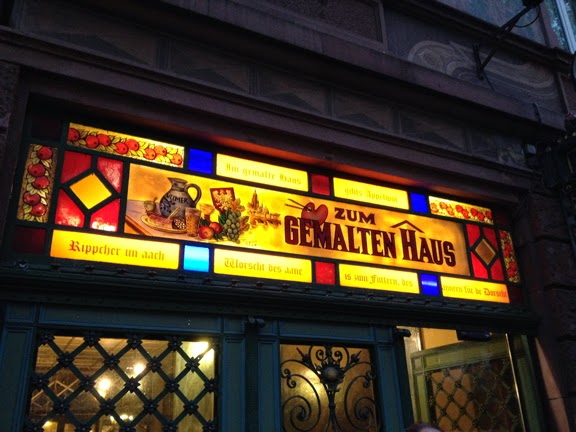 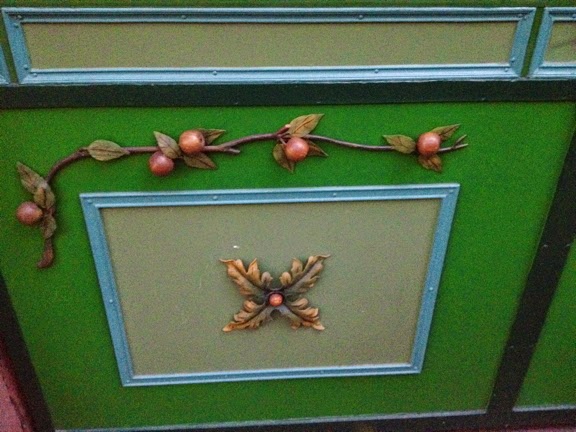 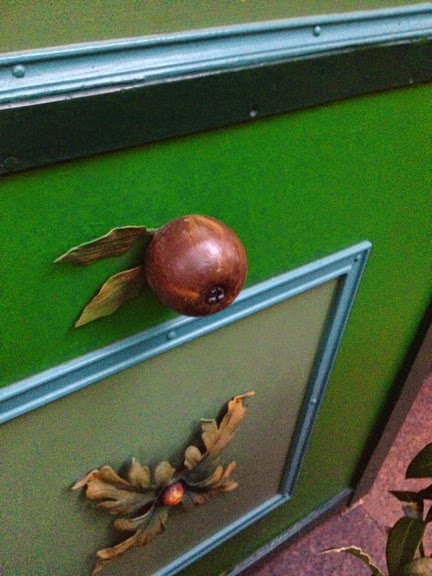 Just to be clear, that was an apple-shaped doorknob.

We sat in what was an outdoor beer garden in warmer months, and ordered the local tipple. In addition, we looked at the menu for a bit and ordered "smashed" Camembert with onions and butter. In my mind I pictured a composed plate with those ingredients. Turned out to be a schmoo of all of those ingredients. Somehow I don't usually get the impression that my Camembert lacks butter. My Lipitor is going to get a workout this trip. 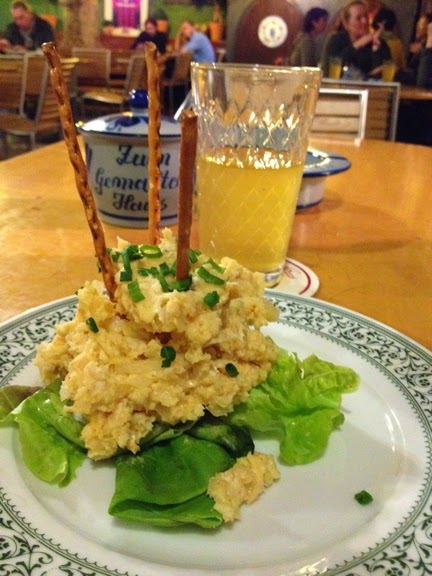 Later we hooked up with a German friend from Minneapolis, mrpiston. He and his wife, ardent fans of all things American, had trees in the back yard that they had named after the starting lineup of the Detroit Pistons. Anyway, mrpiston is back in Frankfurt, with a professorship at the university. We met up with him in Frankfurt at a Turkish fish restaurant where we ate more unexpected pastes: one was a mix of tomato, cucumber and peppers, and the other was a pink smoothie made of fish, beets and something else. 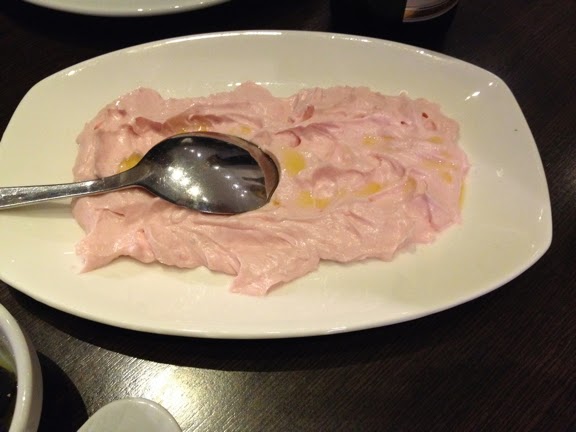 We asked mrpiston about the Minnesota State Fair, one of his favorite events of the year. His obsession with butter sculpture (Princess Kay of the Milky Way) is legendary. Not only did he serve as our docent for the fair a number of years ago, but he is *also* the person who took us to the amazing Prince concert at Paisley Park a few years back. So excited to catch up with him and hear about Frankfurt.

I asked about the fair, since this is the first year he hasn't gone. He replied "there you have put the finger in the wound". Such is his sense of loss. He told us he considered flying back to MN for the fair.

Later at a bar, I brought up the subject of music, knowing that mrpiston is a big music fan. Turns out that mrguy and mrpiston have many essential fave albums in common. Those two could just GO ON. It was so much fun to see them talk about stuff. At one point I piped up and mentioned a personal project that a friend is working on, which is a subject on which mrpiston has written, causing him to say "So you are telling me that you sit at the center of all which is important." 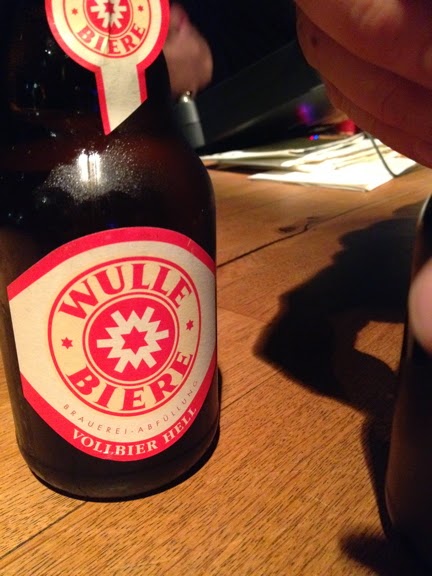 Not really, but it was so fun to have things in common.

We saw this one last cool Frankfurtian thing as we headed back to the hotel. This poster seems to say that if you don't come to this thing they're promoting, in the future you won't be able to say you were there. Heady stuff: 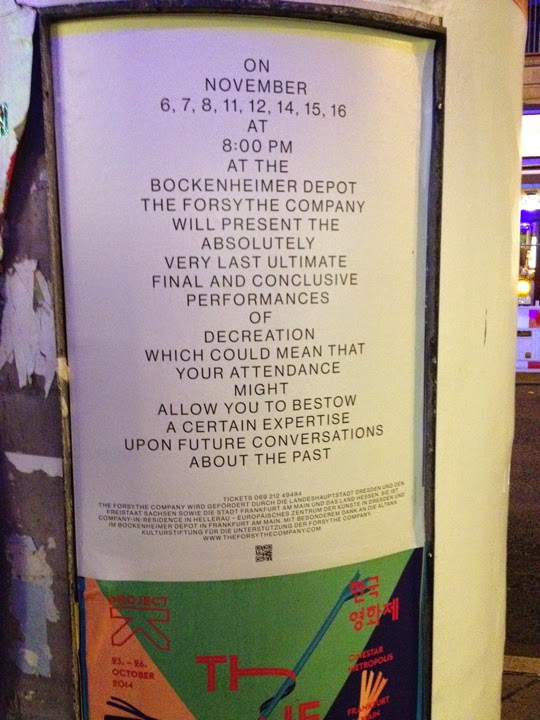 And here we are. It's 6am German time. My colon decided that it was observing the home clock, so I've been up for 2 hours and the alarm is going to go off in 10 minutes.

We'd left our luggage at the airport. We had slept in our clothes. The only things we had with us were things you'd take on a plane, and that didn't include antiperspirant or a toothbrush. We had most of a day to kill before our flight took off.

I wanted to go to the library, so we drove downtown. 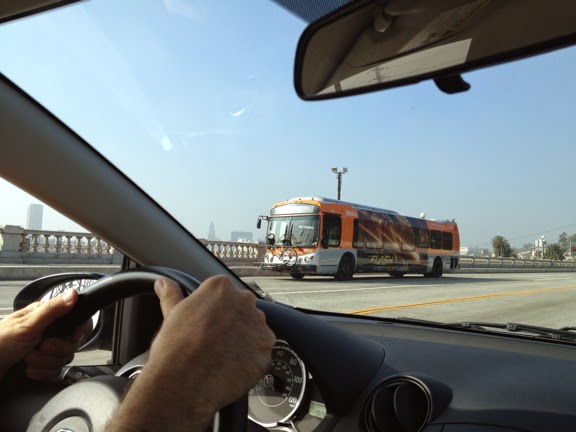 But I pretended it was Germany. 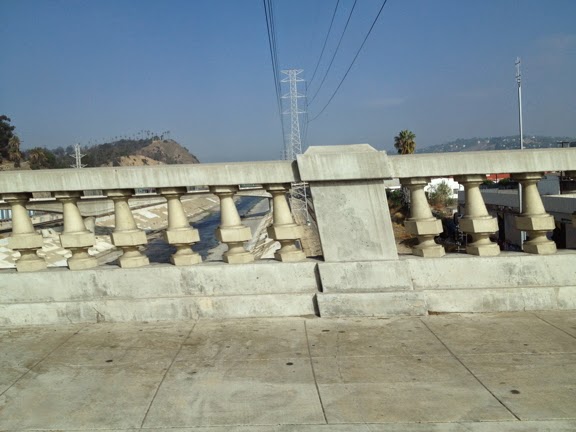 Putting on our antiperspirant in the rental car on the Reeperbahn: 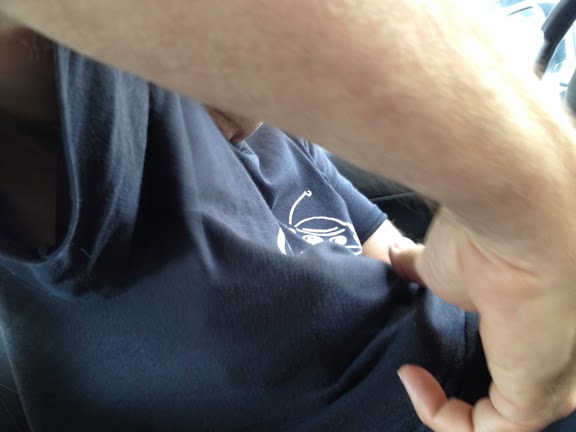 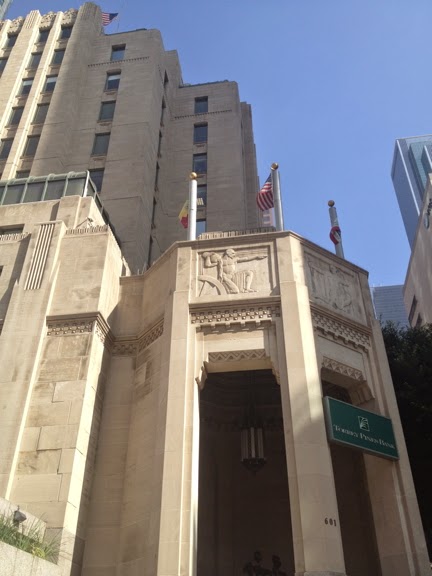 and I have no equivalent for this, but we bought a lot of avocados at the store and made some awesome sandwiches back at Mr. Guy South's house. 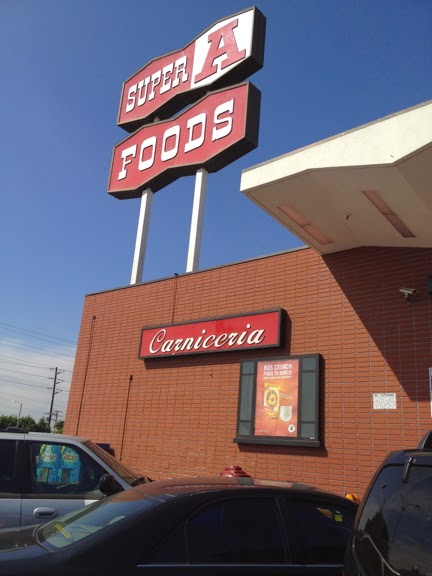 MGS had a work thing, so we took off early to avail ourselves of the United Lounge. Found the quiet tv area and watched the last game of the playoffs with a nice man from Australia who had questions about baseball.