We just had a few simple goals: KCC Farmer's Market, Heiva I Honolulu (Tahitian dance festival) at the Waikiki Shell, and dinner with the Farmer's Daughter. Mission mostly accomplished. 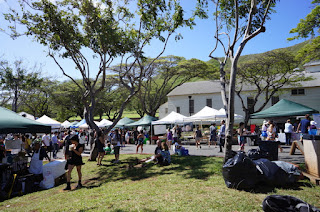 KCC was terrific. It's surprising how much busier it is than in January when we usually go. We completely revitalized the economy by buying crazy vegan / raw food, poi, sweet potato cookies and fresh-bbqed abalone. This was my first abalone experience and I'm sorry to say that I didn't care for it. 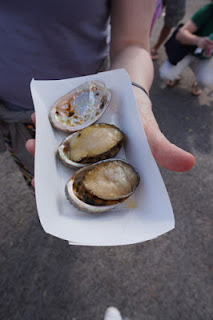 Streets in Honolulu were blocked off for the St. Patrick's Day parade, so we kept our car up the hill and walked down to the Tahiti Fete. 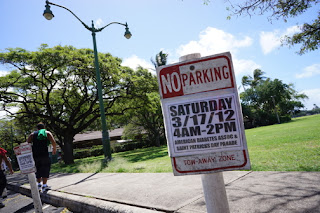 It was hot and sunny. When we got to the Shell, we noticed that there weren't any seats in the shade, so we passed. We did, however, sit in the shade outside the Shell and cool off while listening to the music. On the way back up we could see the backstage area. Reminded us of the Aloha Festival, minus the fog and goosebumps. 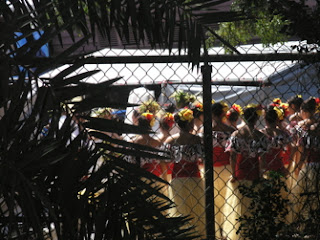 Pho 1 was as cool, crisp and delicious as I remember. Antique Alley was its sweet amazing self. The owners are friendly and knowledgeable, and always have a story to tell.  I found some really weird ephemera to bring home. This is the only place in Honolulu that sells old, weird stuff and gives you a sense of adventure. I highly recommend it.

Our trip home took us past the convention center, just in time to see many cosplay folks leaving the anime convention.

The centerpiece of our day was hanging out with the Farmer's Daughter and her lovely husband. We went back to La Mariana for this, which was the perfect setting. No St. Patrick's day nonsense, a completely mellow setting. I know we just met, but I have missed her, and it was fun to meet her husband, whose blog name is just formulating. We're going to meet up later in the week for a little business and a little pleasure. FD and I are trying to see if we can find a way to work together...

Tomorrow we're headed to the farm...

One night while working in Japan I woke up in the middle of the night and couldn't go back to sleep. Thus started my interest in taro and poi.

I turned on the tv and found what seemed to be a travel show. A woman with a traditional newscaster's mic walked up and down rows of very tall taro plants. She parted the leaves of one row to reveal two ladies eating their lunch in the taro patch, under the shelter of the huge, heart-shaped leaves. Then she interviewed them. Hilarious!

The next segments dealt with getting the skin off of the taro. Various methods were explored, including using a wadded up piece of aluminum foil as a scrubber. Then they showed a traditional method in which a wooden cage was placed in the narrow spot in a stream. The force of the water rotated the cage, and the taro rubbed against each other and the cage.

Then to the studio, where various minor celebrities cooked baby taro roots on George Foreman grills. I'll never know what this show was about, but it made me curious about taro.

About a year later, a small group of us played Hawaiian music at a friend's wedding. As part of the buffet, there was poi. I'd never had it. I asked Auntie to take a picture of me, I was so excited. It was tasty. It had a slight perfume of violets. I started buying poi at the store when I came across it. Mrguy won't touch it.

After my amazing poi experience in September, I really wanted to know how to make it myself. I steamed some taro and pounded it while watching the Golden Globes. Super tasty. Nutty. Not like my first taro or the taro I get from the store. I can't wait to learn more. 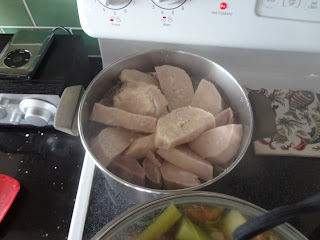 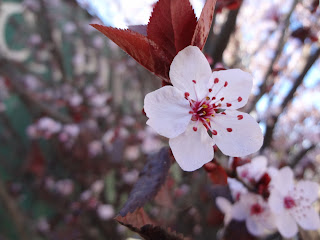 Chinese New Year At The Symphony 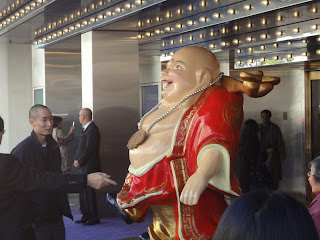 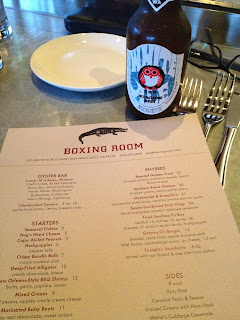 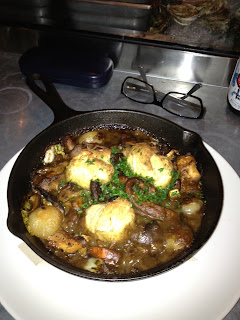 O.K., the mushroom stew looks like dookey, but it was heaven. And the dozen oysters that came before were super yummy, as well.

Count this as one of my places to be in the future.

I didn't even know what you were, Shirty. You were just a really flat piece of clothing gradually being returned to the earth, or the asphalt, as it were. 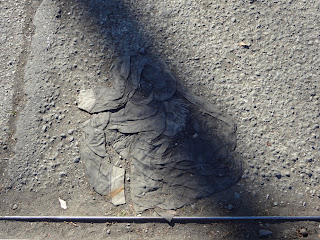 On Wednesdays and Thursdays on the way to the taco truck I would look for you. My little urban mascot. Are you flatter today? Will you even be there for me? What would you look like if you were washed? 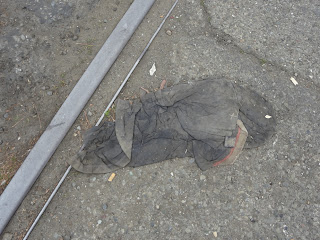 I had to know. 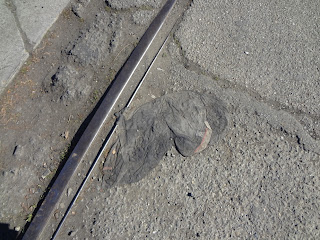 One day I brought a plastic bag to work and picked you up like a piece of dog doo, so my hand didn't have to touch your disgusting rain-plumped fibers. 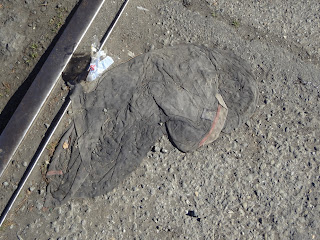 I brought you home. I rolled you out of the bag and into the washing machine without even touching you. As mrguy mocked me for bringing your disease-ridden form into our house and into our washing machine, the rocks from 3rd street rattled around with you and made it sound as if you were trying to get out.

Fluffed and folded, I now know who you are. You are quite ugly, Shirty. It's clear why nobody stopped to pick you up when you'd fallen.

I will redeem you somehow, Shirty, even if only by this post.
Posted by Mrs Guy at 2:40 PM No comments:

Now that the March basho is upon us I'm ready to share the photos from early in the January basho.

You are not fooling anyone, Man In Afro Wig: 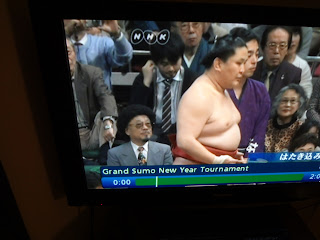 And you are the least likely sumo fan and commentator, Demon Kakka. Pleased to meet you: 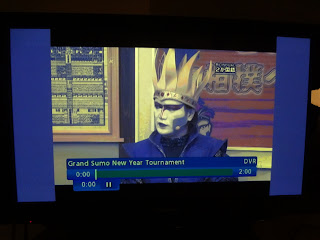 I haven't watched last night's sumo, but I hope that you will return to opine on Baruto's attempt to earn the tsuna.
Posted by Mrs Guy at 2:22 PM No comments:

The Gift Of Time Is Priceless 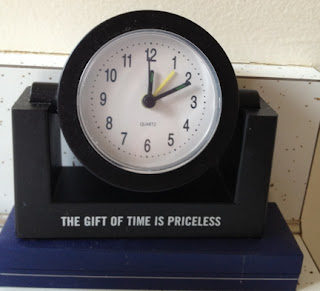 This clock was a gift to volunteers at the hospital where the grand mamoo spends one day a week. I see it every time I use her bathroom.

I find it depressing, somehow, and we're locked in a struggle, this object and I, that I finally had to address.

Although I understand its intended sentiment, in the home of my mother the clock seems to taunt me with the thought that the time I have with her is ticking down. That my own life is ticking down. When faced with this clock it's hard to maintain a purposeful state of enjoying the moments we have now as we're having them.

Yes, it's important to consider the meaning of time, but dread won't help us move through the time we have with each other productively or happily.

You bug me, Clock.

After reading this post that nice boy called to make sure Mom was o.k. That's why he's known as that nice boy. Yes! Mom's great. She volunteers at the hospital and this was a gift to volunteers for their "gift of time". 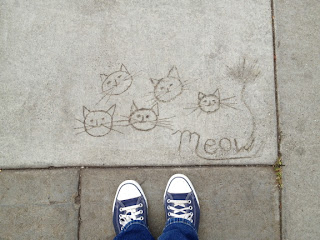 Bought a new traveling uke, with which to get the flock out of Dodge.

The monthly auction catalog is online!

Soon I will punish my glutes and make my physical therapist happy.

Then to the kitchen to make some soup because I apparently didn't have enough at lunch.

The only speck in the frosting, so to speak, was an odd encounter with an old friend after which I have inferred that I am to be avoided. Message received.

And the sun just peeked out from the foreboding clouds :)